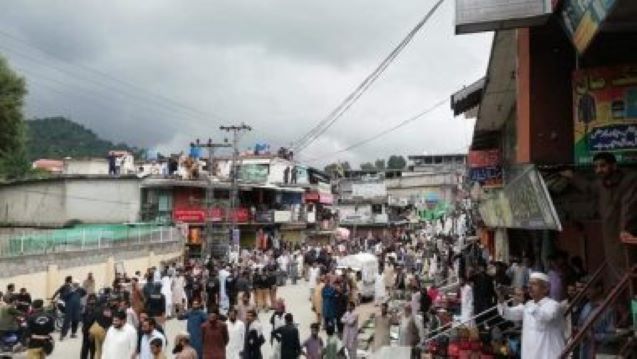 Rawalakot, July 26: Police opened fire and used tear gas on protesters in the Thorar area of Rawlakot district in the Pakistani administrated region of Kashmir (AJK) on Monday night.

At least five protesters were taken to the local hospital after they were injured. A video that surfaced on the internet purportedly showed the incident wherein several were fire by the police.

“We are not going to leave this spot no matter if they call the police forces. We are ready to die. Police have opened fire and tear gas on us ” said one of the protesters.

This violent incident comes as the locals in the area are holding protests against more than 20 hours of load shedding in the region. They are also calling for a reduction in the skyrocketing electricity prices.

In previous incidents, they have blocked the road and demanded the release of the locals who were arrested by the police earlier. AJK produces over 2000 MW of electricity and the total need of the region is just 380MW and still, Pakistan doesn’t give electricity to the occupied region.

Beside this, electricity price is higher in AJK as compared to the regions that consumed much of the electricity generated in AJK.

Last week dozens of people came out on the streets to express their concerns over the heavy load shedding and the high electricity bills and called on the government to provide immediate relief.

Pakistani occupied region produces more than 4000MW of electricity and yet it does not get enough power to meet its needs. Consequently, the people in the region are forced to dwell in darkness.

Earlier this month, dozens of angry residents in several parts of AJK blocked roads over harsh policies imposed by Islamabad that are hurting the economic interest of locals.

AJK’s four million residents have never been allowed to speak a word and address their political and socio-economic grievances.

Its hgih unemployment rate, poor infrastructure, and lack of resources force its citizens to migrate to large cities of Pakistan where the are getting menial jobs as laborers, cleaners and cook, drivers etc.

The difference in allocation of funds as well as development projects in Kashmir – AJK and Jammu & Kashmir amply describes the tale of two Kashmirs.

At the beginning of this fiscal year, India presented a USD 13.33 billion budget for the Jammu and Kashmir. New Delhi allocates nearly five times more funds to J&K than Islamabad allocates for AJK.