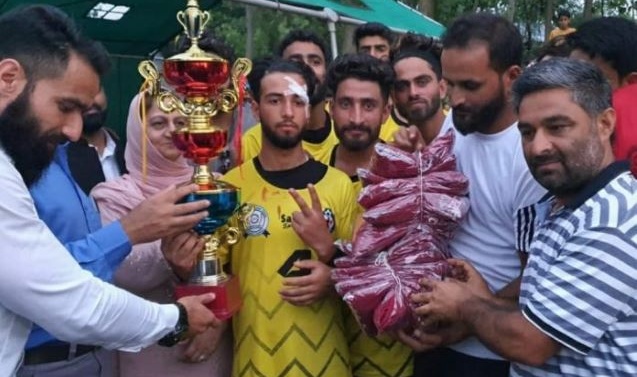 Srinagar, The Kashmir Mega Football Tournament organised by The Voice For Peace and Justice concluded in JKSC playground Sehpora with the FC Hyderia football club emerging as the winner.

Speaking at the event, international football player Mehraj ud Din wadoo thanked the winning squad and praised Voice for Peace and Justice for getting Kashmir’s youngsters involved in sports. “I’m pleased to see the youngsters here have such a passion for sports; if they receive the right instruction, these athletes will soon represent our country on national and international stages.

The Voice for Peace and Justice team was thanked by Nuzhat Ara, the divisional sports officer of the Jammu and Kashmir Sports Council, and it was noted that the organisation is very active in Jammu and Kashmir in encouraging young people to participate in various sports events. The environment created by such a sizable crowd encourages young people to defend themselves against the drug menace and other harmful activities. She added.

In his address to the players and spectators, Sheikh Minhaj, General Secretary of Voice for Peace and Justice, stated, “We are honoured to work for the engagement of youth in Jammu and Kashmir. We are determined to work for the eradication of drug menace and protect our children from the alienated path.” Guests were praised by Minhaj for attending the event. Our playgrounds were once used as graveyards by radical forces, but we believe that playgrounds hold the key to the future of our youth, and we are working to bring back Kashmir’s sports culture. He added.

Farooq Ganderbali, a well-known social activist and the president of Voice for Peace and Justice, thanked all guests and sponsors for helping to organise the event in his vote of gratitude. The voice for peace and justice is committed to opposing and combating all of these radical strategies and engaging our youth in sports and other social activities. He claimed that various radical groups are attempting to instil poisonous ideologies in the minds of our youth in order to disturb the peaceful atmosphere of Jammu and Kashmir. He added.

Trophies along with mementos, Cash Prizes and uniforms were distributed among the Winners, Runner Ups and participants.__Courtesy Time Headline.com