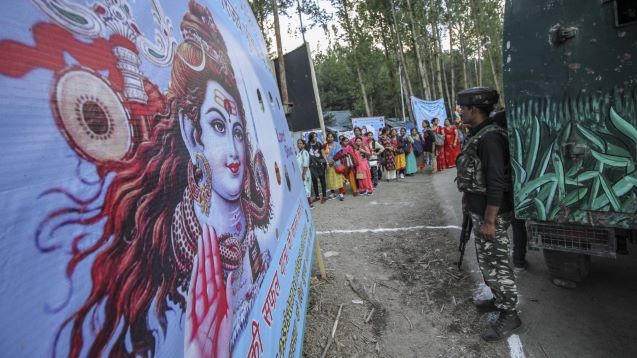 Srinagar, July 8: At least 13 yatris were killed, five others injured and around three dozen missing after a cloudburst near the Amarnath cave shrine on Friday evening caused flash floods, officials said.

J&K DGP Dilbag Singh said 13 pilgrims were killed in the cloudburst that hit the area around 5.30 p.m.

At least three langars (community kitchens) and 25 Yatri tents were washed away in flash floods caused by the cloudburst. Aources said that around three dozen people are missing in this tragedy and efforts are on to locate them.

Rescue teams were immediately rushed to the spot, some using helicopter services. The rescue operation is still going on and the authorities are trying to ascertain the exact casualties or damage caused by the calamity. However, as darkness has engulfed the area, rescue operation are being impeded.

Inspector General of Police, Kashmir, Vijay Kumar had earlier told reporters that rescue operations by various agencies is underway, the situation is under control and the injured are being airlifted for treatment.

Officials said that following the cloudburst, water surged above/the sides of the cave after heavy rains at the upper reaches.

Earlier on Friday, the strategic Jammu-Srinagar national highway was blocked by landslides and mud slush triggered by rain at many places, affecting passage of pilgrims to the two base camps in the Kashmir Valley.

The yatra was flagged off on June 30 after remaining suspended for two years due to the Covid pandemic, and so far, over one lakh devotees have completed the pilgrimage.

Authorities issued helpline numbers for any information regarding the incident.__Greater Kashmir