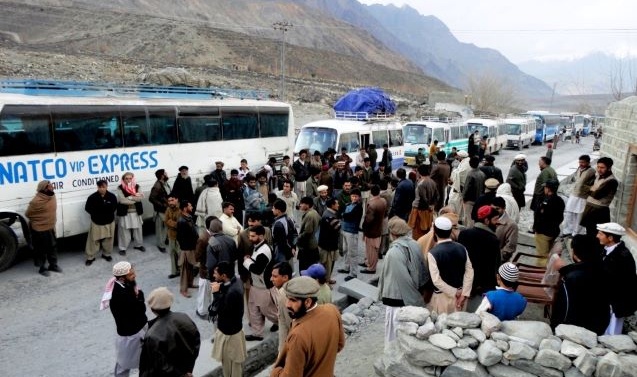 Acording to social media reports (Pictures and videos) People of all shades and walks of life are protesting against land grabbing, illegal allotment of mines to Pakistani nationals in the region and depriving locals of fundamental rights and needs.

According to details the GB government alloted mines to Pakistani citizen with undue favour and previligies which anger the local residence for not having the same opportunity as the son of soil.

According to reports the women and female segment of the societ of GB are also protesting and blocked roads inGilgit, Nagar, Hunza, Yasin, Sakrdu and demand the immediate release of their some family members who were arrested in 2013 uprising, were never give a fair chance of trial and punsihed by the military courts in Rawalpindi, despite having a judicial , prosecution and justice system in GB. They are of the opinion that the civilians trial in military courts is a worse example of fundamental right and carried out only against the innocent people of the area of GB. The are further eleborating that during their protest in Mohrram last year, the military establishment and state government promised to release the innocent arrested gradually and bring the accused involved in the incident before the civil court of GB, but nothing has been done so far and the authorities are using delaying tactics.

According to Reports the roads are blocked since last 6 day in the whole of Gilgit and Baltistan abd the tourists in the area having problems for their movements. Though the civil and military establishment is trying to move them out of the area through alternative land route but its difficult to manage the huge flow of tourist in such cricitical situation.