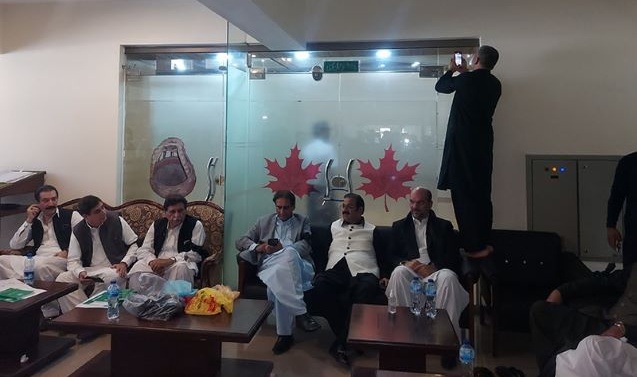 MUZAFFARABAD: Opposition lawmakers in Azad Jammu and Kashmir (AJK) on Wednesday created a scene in the Legislative Assembly building by locking the glass door of the main hall and ensconcing themselves in chairs outside it, blocking the entry and exit of treasury members throughout the day.

The 20-member opposition is on a boycott of the budget session in protest against an amendment to the Rules of Procedure of Assembly, empowering the government to appoint cabinet members as heads of the standing committees as well as alleged denial of development funds to them on a par with treasury members.

At about 10am on Wednesday – half an hour before the session was scheduled to begin –the opposition lawmakers fastened the glass door with a cycle wire lock, seated themselves in chairs they had brought from their nearby chamber and arranged in a square shape to prevent entry to the hall.

In the meantime, a meeting between four each members from both sides was also held in the opposition chamber, but to no avail.

Leader of the Opposition Chaudhry Latif Akbar told reporters that their side did not press for [grant of] funds and instead made just one demand about withdrawal of the “unlawful amendment” to the Rules of Procedure “but the government refused to accept it”.

The stalemate delayed the session for more than three hours, forcing the unruffled treasury members to enter the hall from the visitors’ gallery, hardly three feet higher than the main hall. As the session began, with deputy speaker Chaudhry Riaz Gujjar in the chair, PML-N lawmaker Ahmed Raza Qadri switched off power supply to the hall from an electricity panel affixed outside the glass door. But the assembly staff made an alternate arrangement to restore electricity supply.

During the session, among other lawmakers, two former premiers – Sardar Abdul Qayyum Niazi from the PTI and Sardar Attique Ahmed Khan from Muslim Conference (MC) – also spoke and appreciated the “balanced” budget by the government.

Mr Niazi maintained that the opposition included some seasoned politicians who should have kept in mind and promoted the golden traditions of this house founded by the towering Kashmiri leaders like Chaudhry Ghulam Abbas, Sardar Abdul Qayyum, Sardar Ibrahim Khan and K.H. Khurshid so as to send a good message across the divide.

Recalling that the previous PML-N government had backed out of its commitment to the then opposition on the issue of funds, the MC supremo said the opposition should have attended the session.

He said AJK was a strategic fortress of Pakistan and its budget should be increased and not reduced.

Wrapping up debate, finance minister Abdul Majid Khan asserted that the budget would usher AJK in an era of development and prosperity. While spelling out plans to create direct and indirect employment opportunities in different sectors, he announced that legislation for establishment of a digital bank and grant of voting rights to the overseas Kashmiris would be done at the earliest.

The house also approvedAJK Finance Act, 2022 after the finance minister read out the select committee’s report on it.

Interestingly, around the same time, the protesting opposition lawmakers also held a mock session outside, verbalising their sentiments, proposals and demands before a handful of political activists and media persons.

The opposition left the place a few minutes after deputy speaker Gujjar prorogued the session at 6pm to meet again on Thursday.__Dawn.com