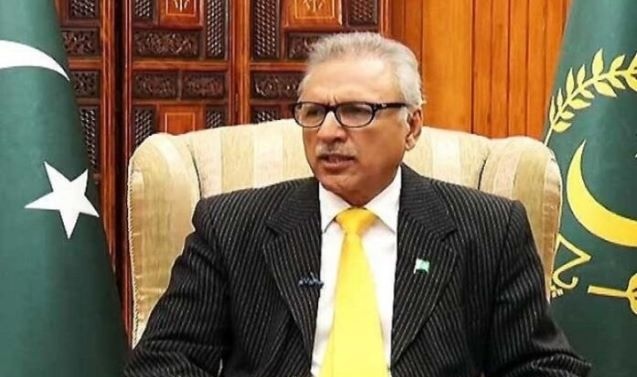 ISLAMABAD: President Dr Arif Alvi has directed the Education Ministry to carry out an investigation into non-utilization a foreign grant given for cheaper textbooks paper almost 30 years ago.

The Central Directorate of National Savings (CDNS) has submitted a representation to the President against the order of the Federal Tax Ombudsman (FTO).

The order under reference stated that deduction of Income-tax and Zakat by National Savings Centre, Civic Centre, Islamabad shows gross incompetence and inefficiency of the staff concerned. Therefore, National Savings Centre is bound to refund the money amounting to Rs10.8 million deducted as advance tax and Rs986,225 deducted as Zakat to the Education Ministry with immediate effect.

The Public Accounts Committee (PAC) of the National Assembly directed Principal Accounting Officer of the Ministry of Education and Professional Training to file a reference with the FTO and Ministry of Finance for the purpose.

Briefly, the Ministry of Education received funds of Rs13.707 million as donations from the German Government in 1993-94, which were invested in the National Savings Scheme (NSS) of the CDNS at the National Saving Centre Islamabad. In pursuance of the 18th constitutional Amendment, the Ministry of Education was devolved and the Ministry of Education and Professional Training was established. Thus, the funds were also transferred to the (M/O FE&PT) being the successor of the defunct M/O Education. Whereas, the CDNS conveyed the total amount of the certificates was Rs73.668 million. However, in the light of the PAC’s directions, the Departmental Accounts Committee in its meeting held in Feb 2020, decided to retrieve the funds and deposit in the state treasury, which was also endorsed by the PAC.

The Ministry approached the CDNS for the purpose and the CDNS issued a cheque amounting to Rs54,265,571 after deducting Rs10,820,734 against WHT as well as Rs.986,225 as Zakat, a total amount of Rs54,265,571 was deposited in the state treasury. However, when the report was placed before the PAC, the committee issued the referred directions to the PAO of the M/O E& PT.

Therefore, the Ministry took up the matter with the Tax Ombudsman who observed that the case underhand reflected inefficiency and incompetence of the officers/officials concerned of the National Saving Centre, unauthorized deductions of Income Tax and Zakat were made while enchasing Special Saving Certificates and they showed complete ignorance that Federal Government is exempt from Income tax as well as Advance Tax under section 49 of Income Tax Ordinance 2001. Similarly, they failed to observe that Federal Government is not a Sahib-e-Nisab under Zakat and Usher Ordinance 1980. It appeared as if they are running their Directorate and various Saving Centres without properly comprehending the relevant rules & regulations.

Hence, National Savings Centre is bound to repay/refund the amount of Rs10,820,734 deducted as advanced tax and Rs986225, deducted as Zakat to the Ministry of Education immediately and necessary improvement in working of National Saving Centre by imparting proper training and refresher courses be arranged for the officers dealing with property and rights of the public, FTO observed.

While upholding Tax Ombudsman’s decision, the President of Pakistan has also expressed his strong displeasure and observed that the government of Germany donated Rs13.707 million in 1993-94 for purchase of paper to enable printing of cheap textbooks.

“Despite the lapse of 30 years, this money could not utilized while we are asking for grants and loans internationally, the president observed.

Then because of an audit objection ,it was deposited in special savings certificate on 23.07.1999 to 23.07.2014. During this time, the government policy for SSC was for automatic roll over every three years that did not require investor’s prompting. The Ministry of Education had forgotten totally about it. However, this sleeping investment had now increased to Rs54,265,500/- The money that was supposed to be used for paper to make cheaper School textbooks played in an investment scheme which is indeed shameful.

The Ministry did not bother, did not care, and totally forgot about a foreign grant given for paper for cheaper text books 30 years ago.

Accordingly, President of Pakistan directed the Ministry of Education to conduct an inquiry, hold specific people responsible and take action against them according to law. He also directed to submit a report to FTO within 45 days.__Pakistan Today