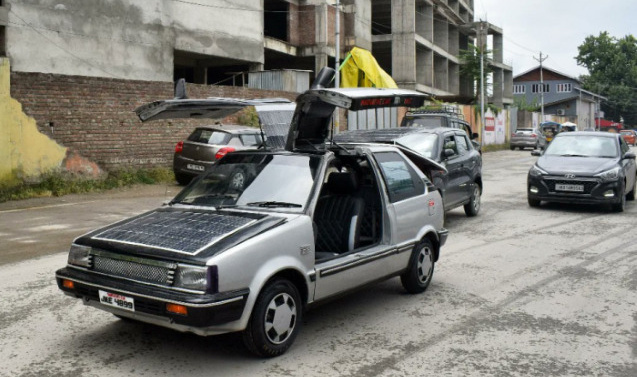 The images of a solar powered-car covered with panels on all its available surfaces — from the bonnet to the rear windshield — went viral on social media and a Srinagar mathematics teacher is earning plaudits for it.

Bilal Ahmed from Srinagar’s uptown Sanat Nagar area worked for 11 years to turn his dream solar-powered car into a reality, turning his passion into a dedicated project. The idea behind the innovation lies in his wish to create a luxurious car that doesn’t bleed one’s pocket and can be affordable.

The project started off as a car for the disabled, but financial issues stopped it short. “No one provided me with any financial assistance for the project and I had to spend over Rs 15 lakh making the fully-automatic car,” the innovator rued.

He said the car he has designed now has features that are as good as other luxury cars. “It will only run on the electrical energy generated by the monocrystalline solar panels. I want to make the car affordable for common people,” Ahmed said.

“Cars like Mercedes, Ferrari and BMW are just a dream for a common person; few are able to afford them. I thought of this car to give a luxurious feel to the people,” he said.

While most sports cars have a seating capacity of just two, Ahmed modeled his vehicle to accommodate up to four people, keeping cost-effectiveness at its core.

Basit Zarger, a Kashmiri photojournalist tweeted, “Bilal Ahmed, a maths teacher from Srinagar, has developed a solar car. Bilal has been working on this project for last 11 years.”__Courtesy Deccan Herald