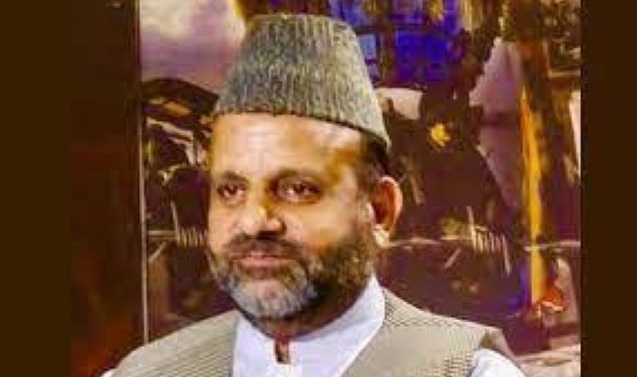 The newly-elected convener of the Parties Hurriyat Conference Azad Jammu and Kashmir (APHC-AJK) chapter, Mahmood Ahmed Saghar has said that Kashmiris will continue their peaceful struggle for securing their right to self-determination till it reached its logical conclusion.

Mahmood Ahmed Saghar in an exclusive interview with the Kashmir Media Service said the Kashmiris have been rendering unprecedented sacrifices for their inalienable right to self-determination since 1947 and their freedom movement is one of the longest-running freedom movements in the world.

He said that the only demand of the Kashmiris was to be given the right promised to them by the international community.

Mahmood Ahmed Saghar said if the issues of East Timor and South Sudan could be resolved through referendum then why not Kashmir, therefore, the international community should give up its double standard and come forward to help the Kashmiris in securing their inalienable right.

He said the Kashmiris are continuing their freedom movement with determination despite facing the worst Indian atrocities. The APHC-AJK Convener said that at present all the top Hurriyat leaders, including Masarrat Aalam Butt, Shabbir Ahmed Shah, Yasin Malik, and Aasiya Andrabi were lodged in jails while a large number of youth had also been sent behind the bars by the Narendra Modi-led fascist Indian government.

Replying to a question, he said that the APHC wanted that all the people living in Jammu and Kashmir, including Muslims as well as Pandits, Sikhs and Buddhists must be allowed to exercise their right to self-determination. Mahmood Ahmed Saghar said that Pakistan, Azad Jammu and Kashmir and the Hurriyat leadership should formulate a joint strategy to raise the Kashmir dispute more effectively at the international level. He said Azad Jammu and Kashmir has more responsibility regarding the Kashmir dispute as it is the base camp of the freedom movement.

He said, “We do not need any other road map for resolving the Kashmir dispute because the United Nations has already given a road map for it and we have to take it further.”

To another question, the APHC-AJK Convener said that mere statements would not do anything but the United Nations would have to take practical steps to implement its resolutions on Jammu and Kashmir. He added that all the five permanent members of the UN Security Council consider Jammu and Kashmir as a disputed territory and India cannot deny this fact until it resolves the Kashmir dispute.

He said that the Kashmiris, as well as Dogras of the Jammu region and Buddhists of Ladakh, were also angry over the new measures of demarcation and change in the demography of the territory.

He said Kashmiris have never recognized the Indian Constitution so the steps the Indian rulers are taking in the occupied territory have no constitutional and legal status and ‘our only demand is that India withdraws from Kashmir’.__Daily Times