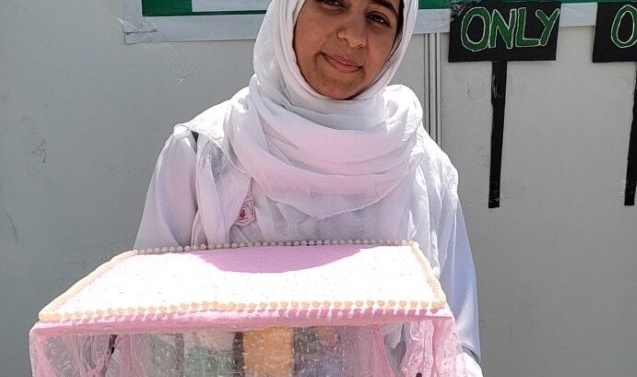 Srinagar: Eighteen-year-old Gul Yasmeena has been an avid conservationist since her childhood. A resident of Gurez, she always loved to live in nature dotted with green pastures, brooks, and hills.

When Yasmeena moved to Srinagar two years back, she was pained to see plastic littered everywhere.

Waking up to plastic pollution, she decided to utilize this non-biodegradable waste for some constructive purpose. After much experimentation, she decided to make eco-bricks, a popular concept in South Africa, out of plastic bottles and single-use plastic wrappers.

“There is garbage everywhere in the valley. It mostly contains single-use plastic bottles and wrappers. Single-use plastic is non-biodegradable and needs to be tackled to conserve our environment. So, this idea came to me to make eco-bricks, which is very much popular in European countries,” Yasmeena said.

She initially made tables out of the eco-bricks, which were sent to the experts to check their efficacy.

“The small tables can withstand the weight of more than 75 kgs. I made some other items out of the single-use plastic and presented them to Lieutenant Governor Manoj Sinha on World Environment Day,” she said.

Yasmeena said the eco-bricks are much more durable than locally used bricks and have a life of more than 2000 years.

“We can initially build huts and other small budlings in villages from these eco-bricks. These bricks are different from the ones made in other countries as they are more rigid than the locally used bricks. Eco-bricks can be used to make benches and walls for public parks,” she said.

Yasmeena said that the eco-bricks are best suited for the climate of Kashmir, where the temperature drops below minus during winters.

“During winters we face extreme cold. Eco-bricks are best suited for such extreme weather. These bricks give warmth during the extreme weather and stay cool during summers,” she said.

Yasmeena said she will raise awareness regarding the eco-bricks to make their usage popular in Kashmir. “I wish to get some support from the government to raise awareness about eco-bricks. I have plans to make some furniture and other tools from these eco-bricks so that they can be demonstrated before people,” she said.