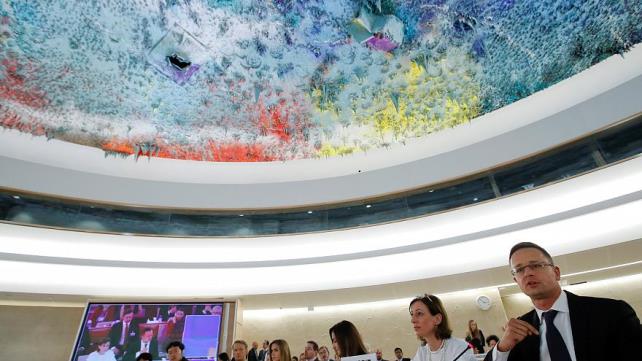 The United Nations has declared that unfair trials of prisoners of war amounts to war crimes, after three foreigners captured while fighting with Ukraine forces were sentenced to death by pro-Russian rebels.

The spokeswoman for the Office of the UN High Commissioner for Human Rights said on Friday that authorities in the pro-Russian self-proclaimed republics in Ukraine had not met essential fair trial guarantees for some years, and “in the case of the use of the death penalty, fair trial guarantees are all the more important”.

“According to the chief command of Ukraine, all the men were part of the Ukrainian armed forces and if that is the case, they should not be considered as mercenaries,” Shamdasani said.

“Such trials against prisoners of war amount to a war crime,” she added.

“Since 2015, we have observed that the so-called judiciary in these self-proclaimed republics has not complied with essential fair trial guarantees”.

Kyiv has been battling a pro-Russian armed uprising since 2014 that has gained control in two breakaway eastern regions of Ukraine.

The three were charged with violating four articles of the DPR’s legal code, including attempting to “seize power” and “training in order to conduct terrorist activity”, the separatist-affiliated Donetsk News Agency reported.

The separatists argued that the men were “mercenaries” and not entitled to the usual protections accorded prisoners of war.

Aslin’s and Pinner’s families have said that the two men were long-serving members of the Ukrainian military.

Saadoun’s father told a Moroccan online newspaper that his son is not a mercenary and that he holds Ukrainian citizenship.

The British government said Russia must take responsibility for the “sham trial” of their citizens.

Government minister Robin Walker said that it was “an illegal court in a sham government” but that the UK would use “all diplomatic channels to make the case that these are prisoners of war who should be treated accordingly”.

British Foreign Secretary Liz Truss is due to speak to her Ukrainian counterpart Dmytro Kuleba later on Friday about the case.

The UK has not announced any plans to speak to Russian officials – and it does not recognise the self-proclaimed Donetsk republic and will not officially contact the authorities there.

Russia is the only UN member state to recognise the DPR, much of which is still controlled by Ukraine, as independent.

Russian foreign ministry spokeswoman Maria Zakharova said in a statement that the UK should appeal directly to the DPR authorities, and said London’s reaction to such cases was “often hysterical”.