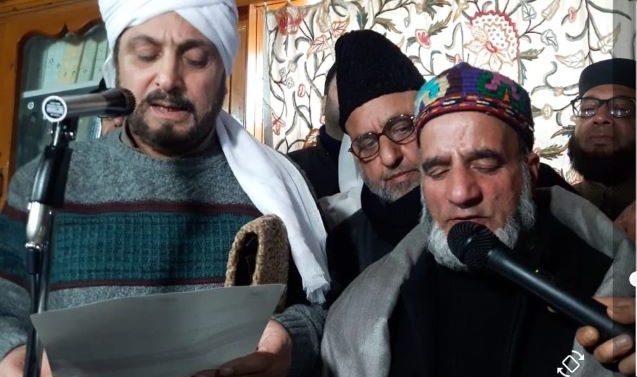 Srinagar: Kashmir’s Grand Mufti Nasir-ul-Islam has expressed his pain on the targeted killings in Kashmir and said “every killing is deplorable and a heinous crime. I want people to understand that we’ve to maintain brotherhood between the communities. We shouldn’t allow miscreants to create an atmosphere of mistrust.”

Speaking to the media persons about a spate of recent targeted killings in the Valley by terrorists, he said,” Minorities can live with us in our houses.”

The call for supporting minorities was raised from several mosques across Kashmir during Friday congregational prayers. One such sermon by Iman of Jamia Masjid of Anantnag during Friday congregation went viral on social media. The Kashmiri cleric condemned the killings of minority Hindus and the listeners are approving his comments with gesticulation and a loud voice

Grand Mufti said: while the Muslims had been demanding the return of Kashmiri Pandits, they must not leave and rather live with the majority Muslims with respect and dignity.’

He said the violence was no means to resolve any outstanding issue. “Every murder is a heinous crime and people cannot be allowed to create an atmosphere of mistrust by mischievous elements”.

The Grand Mufti talked about the return of Kashmiri Pandits to the Valley. “We have been lamenting about their return for the last 30 years. Now they have returned and they should live with us in peace and dignity.”

Kashmiri Pandits and other non-Muslims living and working in Kashmir were targeted by the terrorists in Kashmir. Last month, two civilians and three off-duty police personnel, including Kashmiri Pandit employee Rahul Bhat, were killed by terrorists in Kashmir. In October last year, famous chemist ML Bindroo was murdered in his shop. Members of the minority community are protesting the targeted killings and some of them have spoken of moving out of the Valley.

The Grand Mufti also said that Islam and other religions emphasize on the safety of every human being. Expressing grief over the violence in the Valley, he said that the blood of human beings and humanity has become cheap in Kashmir.

He said that it’s the responsibility of the locals to ensure and make the Kashmiri Pandits feel home here. Investigation into these killings should be done fast and culprits to be identified.

He said that tourism has started booming again in valley and tourists have started returning in huge numbers. During this time, such terror incidents have a severe impact on the economy of Kashmir and affect the livelihood of many kashmiris who are dependent on the tourism growth. Terror organisations should understand that such actions are causing more damage to local kashmiris than anyone else. He reiterated that real kashmiris want peace and prosperity in valley with complete social harmony.