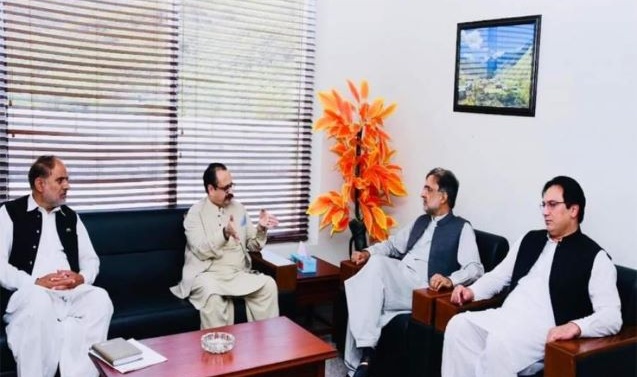 MUZAFFAFABAD: Shehbaz Sharif-led federal government has slashed the development grant and share in federal taxes which were due to Azad Jammu & Kashmir. This move would have a serious blow to AJK’s development plans for the ongoing and next fiscal years.

AJK minister for finance and inland revenue Abdul Majid Khan at a press conference in the PM House briefed the press on this unwarranted action by Federal Government. He was accompanied by minister for planning and development Chaudhry Mohammad Rasheed, minister for civil deference and disaster management Chaudhry Akbar Ibrahim and special assistant on information Rafique Nayyar.

The finance minister said that AJK’s development budget, which is provided by the federal government in totality, stood at Rs 28 billion in the ongoing fiscal year, but the federal finance division had unilaterally slashed it by Rs 5.2 billion.

Similarly, he said, the federal government was to provide Rs 49.9 billion to AJK during the ongoing fiscal year (2021-22) as the latter’s 3.64 percent share in the federal taxes pool but that too had been slashed by Rs 4.4 billion.

The 3.64 percent share from the federal taxes pool was agreed under a financial arrangement between Islamabad and Muzaffarabad in 2018 and constituted a major source of AJK income for its recurring budget, he said.

Mr Khan said that according to the working of AJK finance department, the 3.64pc in FY 2022-23 equalled Rs 74.32 billion, but the federal government had recently informed that it would provide only Rs 60 billion.

“This will create a shortfall of Rs14 billion in our income which we cannot bridge from any other source,” the AJK minister said, warning that the decision, if not reviewed, could affect AJK’s financial system beyond control.

“It’s for the first time in AJK’s history that the federal government is going to cut our normal [recurring] budget,” he added.

The AJK minister informed that the federal government had also stopped funds for the LoC-package despite the fact that 40 percent work had already been done.

Besides this, the federal government has also reduced the recurring grant for higher education from Rs 104.93 billion to only Rs 30 billion. The allocation is 45 per cent less even than the current year’s allocation which was Rs 66.25 billion. This shocking decision would have drastic effect on the higher education institutions of AJK. Prof Dr Muhammad Kaleem Abbasi, Vice-Chancellor of the University of Azad Jammu and Kashmir, said that all the universities of AJK depend on the Higher Education Commission (HEC) for their financial resources and if the budget of the HEC is reduced due to lesser grant, it will have adverse negative impact on the universities of Azad Kashmir.