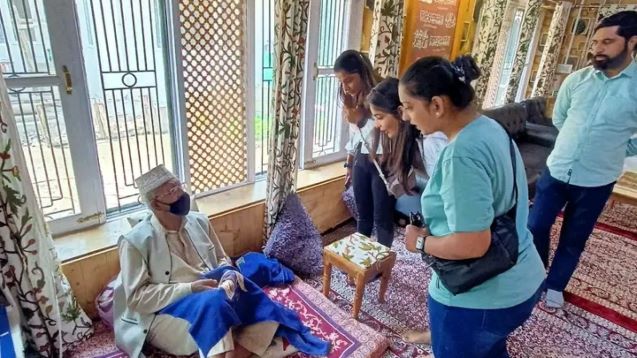 Kashmir handmade craft, which is world-famous and has helped Srinagar city to get Recognised as the UNESCO’s Creative City in the field of Craft and Art, is being revived now. The Jammu & Kashmir government has started a process in a unique way to give new life to those world-famous dying craft of Kashmir.

Craft Safari, a unique initiative from the Department of Handicrafts & Handloom, aims to integrate tourism with handicrafts and create an eco-friendly sustainable tourism in Kashmir.

This is a completely new dimension of Kashmir tourism. Tour operators in Kashmir have recently received groups from Surat, Jaipur, and Mumbai and more groups have already booked for the safaris. The Handicrafts Department had during April, 2022 conducted a dry run of sorts for locals but thanks to the media coverage and social media buzz, craft safaris have started attracting tourists.

This provides an opportunity for the tourists to interact with the artisans and buy shawls and other handicrafts items directly from them without any middlemen. This also augurs well for the artisans and also the tourism stakeholders.

The safari takes visitors to different artisan clusters of the old Srinagar city.

Iliyas Rizvi, founder of the Educational Revival through Arts and Aesthetics (EdRAAK), who has been conducting heritage walks and craft tours for the past five years, said the ‘recognition’ from the government had encouraged them.

“I have been conducting heritage walks and craft tours in old city areas for the past 5-6 years. It is a niche market and only a select group of people used be interested in going for heritage or craft walks. By starting the craft safari, the government has given it recognition and this also gave us a lot of encouragement,” told Rizvi

Kashmir has historically been an important craft centre due to its geography and climate. The UN’s recent tag of Srinagar as a Creative City will open opportunities for Kashmiri to have craft exchanges with the world craft centres and get back that lost sheen, which has unfortunately discouraged craftsmen and artisans. Recognizing and financially respecting craftsmen and artisans on the ground will not only revive them but will also encourage the new generation to take it up as a profession.