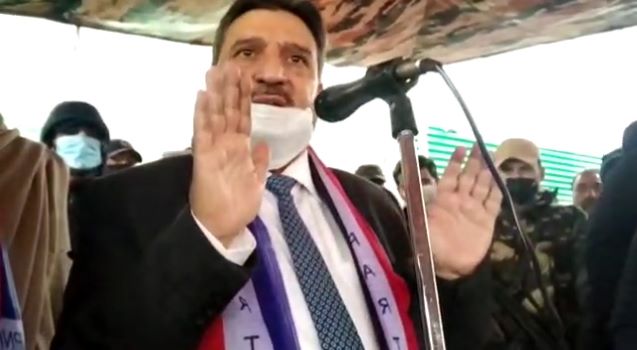 Jammu: The president of Apni Party Syed Altaf Bukhari Sunday said that the BJP has betrayed the people of Jammu who had voted the party to power in 2014 assembly elections in the erstwhile state of Jammu and Kashmir with 25 assembly seats.

The BJP has done nothing in favour of the people who voted them to power in the last assembly elections of erstwhile J&K state, said Altaf Bukhari while addressing a public gathering in Domana area situated outskirts of Jammu city.

“We founded the party when there was complete hopelessness among the people all around in J&K. On August 5, 2019, our identity was snatched and our 200 year old state was snatched by the BJP which was voted to power by the people as they got 25 seats from Jammu. This was the same BJP which used to claim that they will develop Jammu. Yes, they changed the fate of Jammu with the increase in prices of construction material like sand, stones etc and it was possible by allotting contracts to outsiders,” he said.

“They snatched the contracts from the locals and unemployed them and handed over the same contracts of extracting natural resources to the outsiders from UP and Bihar. Even for drain construction, people from Gujarat and UP have taken contracts,” he claimed.

He directly targeted BJP while speaking in the saffron party’s strong hold and questioned the rightwing party for its failure in even to construct a road – which led towards the public rally meeting at Machine in Domana.

“When I came here, I was ashamed to see the shabby condition of roads as if I was travelling in a 100 years old route where no one goes. Is it what was promised by the BJP leaders of Jammu to the people,” he said while expressing concern over the poor condition of the road in Domana.

He asked the gathering whether this type of development was promised? “Still people are facing basic issues like drinking water. What has happened to the promises made with the people (referring to the scheme Har Ghar Jal),” he said.

He said: “If you (BJP) have not been able to fulfill promises in eight years then what are you going to do now. You are only blackmailing the people of Jammu in the name of religion. Similar pattern of divisive politics is adopted in Kashmir by the National Conference and PDP as they rake up the issues of Art 370 and Art 35A.”

“Ask them (J&K BJP) questions who you had voted for in 2014 and what they gave you after becoming ministers (in BJP-PDP coalition government),” he said and asked the gathering “Whether BJP has given anything to you? Tell me if I am wrong.”__GK News