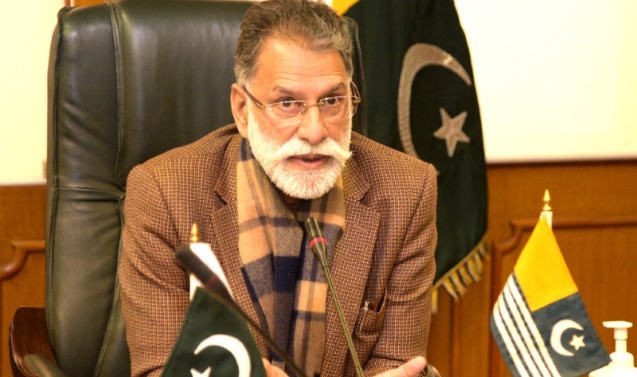 ISLAMABAD: Azad Jammu and Kashmir (AJK) Prime Minister Sardar Abdul Qayyum Niazi on Thursday tendered his resignation even before voting on the no-confidence motion against him could be held.

A total of 25 dissenting members of the PTI in the AJK Legislative Assembly had filed the no-trust motion against Niazi on April 12.

The motion had been filed under Article 18 of the AJK’s interim Constitution. The move came after PTI Chairman and former premier Imran Khan was ousted from the government on April 9.

The AJK Legislative Assembly session was called on Friday (today) for voting on the move.

Addressing a hurriedly-called news conference in Islamabad, Niazi said he was thankful to Imran for picking him for the post of AJK premier.

He adopted the stance that a no-confidence motion was filed against him “without any accusation”.

He further said, “The allegations leveled against me are baseless and I reject them”.

“My leader Imran Khan highlighted the Kashmir issue in the world and said that he was the ambassador of Kashmiris.”

Niazi recalled that as soon as he took the office of AJK premier, his prime focus was the Kashmir issue and matters pertaining to those living on the Line of Control (LoC).

Earlier in the day, Niazi had sacked four ministers and an adviser who had brought the no-confidence motion against him.

According to a notification, the ministers were sacked for “misconduct, corruption and suspicious activities”. The development came after Niazi met Imran and apprised him of the motive behind the move.

A simply majority is needed to oust the premier. The AJK Assembly has 53 seats, out of which PTI has 32 seats, PPP 12, PML-N seven, and Muslim Conference and Jammu and Kashmir People’s Party have one seat each.

Niazi, 61, was elected as a member of the Legislative Assembly on July 25, 2021, elections from Poonch district, which lies on the LoC.