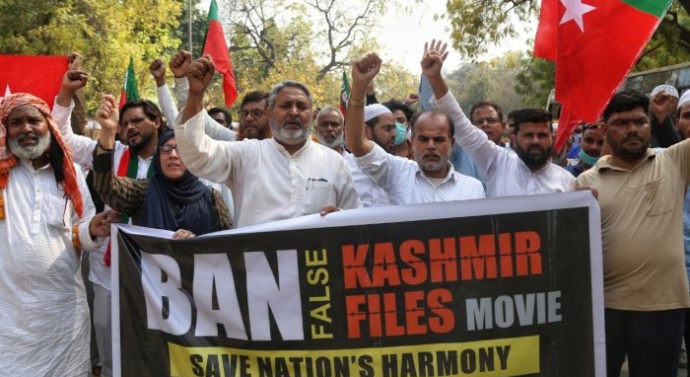 An Indian film focusing on the exodus of thousands of Hindus from Indian-administered Kashmir that won accolades from Prime Minister Narendra Modi is fanning anti-Muslim sentiments in the country.
The Kashmir Files, a 170-minute Hindi-language movie released last week, tells the fictional story of a student who discovers his Kashmiri Hindu parents were killed by rebels – and not in an accident as his grandfather told him.
Hundreds of thousands were forced out of Kashmir, losing homes and many lives, when a revolt erupted against Indian rule in 1989. Many were Hindus, known as “Kashmiri Pandits”, and later ended up living in camps across northern India.
A small number of the community, however, continues to live in the Muslim-majority valley.
Supporters of the movie, set during both the violent upheaval of 1989-90 and the present day, say it shines light on an often overlooked chapter of Indian-administered Kashmir’s history.
Since coming to power in 2014, Modi’s Hindu nationalist Bharatiya Janata Party (BJP) has given support to displaced Hindus who want to eventually return to Indian-administered Kashmir.
Since the removal of the disputed region’s special status in 2019, Modi’s government has taken a series of steps that local Muslims fear are aimed at changing the demography of the region and robbing them of their land and livelihoods.
Modi on Tuesday praised the movie, saying it showed the truth and that vested interests were running a campaign to discredit it.
They are shocked, that the truth that was hidden for so many years is out and is backed by facts,” Modi said, without clarifying to whom he was referring to.
A state leader from the BJP gave government employees a half-day off to see the movie, while supporters of Modi and the BJP endorsed the movie on social media.
However, critics say it is loose with the facts and targets Indian Muslims even outside Indian-administered Kashmir. Many see the film as evidence of the growing religious polarisation Modi’s critics say he has fostered since coming to power in 2014.
Multiple videos were published online showing people in theatres cheering, shouting hate slogans, and calling for violence against Muslims.
Al Jazeera could not verify the authenticity of the videos now viral on Indian social media.
“The state machinery propping up the film and the reaction to it is disappointing,” said Hussain Haidry, a screenwriter who works in Bollywood.
As a Muslim, you feel a sense of despair that movies like The Kashmir Files are encouraging and adding to Muslim-hate in the population.”
Many critics decried the virulent hate speeches against Muslims in theatres and asked why the government was not acting against the perpetrators.
“Calls for genocide of Muslims in theatres following the screening of #KashmirFiles. Will the film’s makers, actors, admirers including the PM appeal against such calls? You know the answer,” tweeted politician and feminist Kavita Krishnan.
Columnist Asim Ali was also critical of the film in a piece on news website Newslaundry.
“The message an ordinary Hindu is expected to take from the movie (as attested by many viral videos coming out of theatres) is another kind of ‘never again’ – never again to trust the Muslim, the secularist or the leftist,” he wrote.