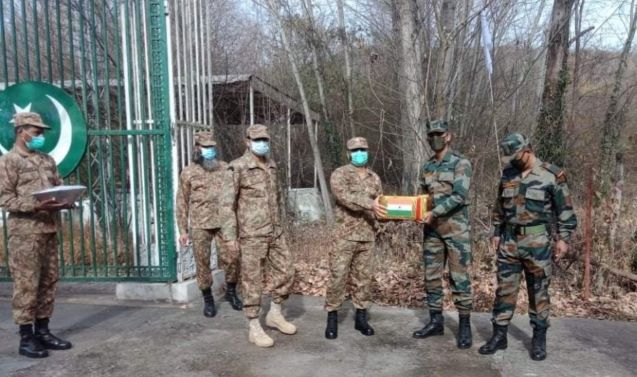 ISLAMABAD: Pakistan and India’s army on Saturday exchanged sweets at four border crossing points along the Line of Control (LoC) to mark the start of the New Year.

The soldiers exchanged sweets and greetings at Rawalakot, Chakoti, Chilliana, and Tatapani border crossings along the LoC.

Pakistan and India have exchanged with each other the list of nuclear installations and facilities in line with an agreement that bounds both countries to share the relevant information by Jan 1 of every year, said a statement by the Foreign Office on Saturday.

The exchange was made in accordance with the Article-II of the Agreement on Prohibition of Attacks against Nuclear Installations and Facilities between Pakistan and India, signed on December 31, 1988, and ratified on January 27, 1991.

The list of nuclear installations and facilities in Pakistan was officially handed over to a representative of the Indian High Commission at the Ministry of Foreign Affairs at 10:30 am, the statement added.

On the other hand, the Indian Ministry of External Affairs in New Delhi handed over the list of Indian nuclear installations and facilities to a representative of the Pakistan High Commission at 11:00 pm hours (IST).

“The agreement provides, inter alia, that both countries should inform each other of their Nuclear Installations and Facilities within the definition of the Agreement on 1st January of each calendar year,” the statement read, adding that this practice has been followed consecutively since 1992.

Pakistan also shared a list of Indian nationals detained in Pakistani jails with the Indian High Commission. As per the statement, at least 628 Indian prisoners – 51 civilians and 577 fishermen – are in Pakistan.

As per the list shared by New Delhi, at least 335 Pakistani citizens are languishing in Indian jails. The list included 282 civilians and 73 fishermen.

This step is consistent with clause (i) of the Consular Access Agreement between Pakistan and India, signed on May 21, 2008, under which both countries are required to exchange lists of prisoners in each other’s custody twice a year, on January 1 and July 1, respectively, the statement added.__Tribune.com