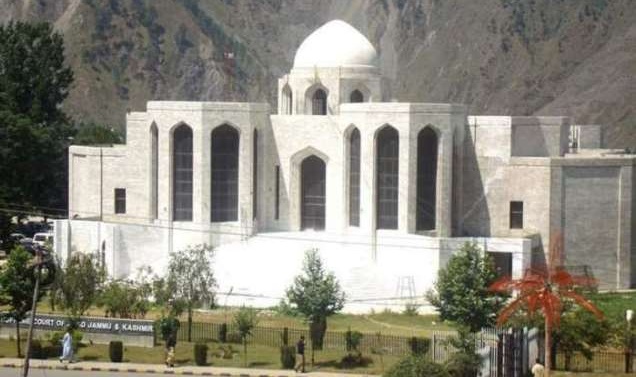 Azad Jammu Kashmir Bar Council here on Monday announced complete boycott of all cadre judiciary – lower to superior courts – with effect from January 03, 2022, to press the AJK State government for early acceptance of their much delayed demand of induction of all 09 judges against much-prolonged vacant positions to the High Court of Azad Jammu and Kashmir without further delay to end the ongoing judicial crises in the State for the past 16 months.

Addressing a crowded news conference at a local hotel here, Vice Chairman Azad Jammu Kashmir Bar Council Raja Fiyaz Haider Nawabi Advocate revealed that lakhs of litigants – related to over 20 thousands of under-trial cases were languishing in the corridors of the Superior judiciary of the State High Court in wait of the verdicts on their cases through the inductions of much awaited judges against the due positions lying vacant since over past 16 months, he underlined.

Nawabi further announced that the AJK-wide lawyers protest program would be enlarged to the long-march from entire AJK to Islamabad to be followed by indefinite ‘sit-in’ (dharna) at the ‘D’ chowk in the federal metropolis to press the authorities including the government of Azad Jammu Kashmir if their demand was not met by the stipulated time frame – to be announced later on, he added.

Nawabi demanded of the Prime Minister of Azad Jammu Kashmir Sardar Abdul Qayyum Khan Niazi to take immediate notice of the fast deteriorating situation caused by the lack of due number of judges to the High Court of Azad Jammu Kashmir for past over one year and four months. “It is the legal, moral and constitutional responsibility of the AJK Prime Minister to ensure early end of, what he described, the history’s worst judicial crises in Azad Jammu Kashmir due causing a stumbling block in dispensation of speedy and inexpensive justice to thousands of the litigants roaming pillar to post in wait of justice for over last 16 months, he added.

Nawabi underlined that the High Court of Azad Jammu Kashmir was comprising at least 10 judges including a Chief Justice, an Ulema Judge and eight normal judges.

The Vice Chairman AJK Bar Council underlined that at present the High Court of AJK was performing with an only judge – the sitting Chief Justice of the court Mr. Justice Sadaqat Hussain Raja. He added that over 20 thousands of under-trial cases in the High Court of Azad Jammu Kashmir were lying shelved in the AJK High Court – currently comprising only one judge – the incumbent Honorable Chief Justice Mr. Justice Sadaqat Hussain Raja – in wait of the verdicts due to lack of the bench / benches comprising required number of judges – because of the non-availability of due number of judges in the court.

“It is enjoined upon the sitting AJK government to bring the ugly situation caused by the unrest among the litigants – besides the legal fraternity of Azad Jammu Kashmir due to the inordinate delay in appointment of at least all 8 to 9 judges to the High Court of Azad Jammu Kashmir into the notice of the Chairman and Vice Chairman of Azad Jammu Kashmir Council to pave the way for disposal of thousands of the under-trial cases , without further loss of time”, Nawabi urged.

It may be mentioned here that then Supreme Court of Azad Jammu Kashmir comprising then Chief Justice Muhammad Azam Khan and Judge (incumbent Chief Justice) Justice Raja Saeed Akram Khan had said in the order “whenever a seat becomes vacant in the High Court of AJK due to the retirement of a judge in routine, will have to be filled in within next 30 days from the date of retirement and if a seat in the HC becomes vacant due to any other reason like death of a judge or resignation by a judge, is required to be filled in within next 90 days”.__Daily Times