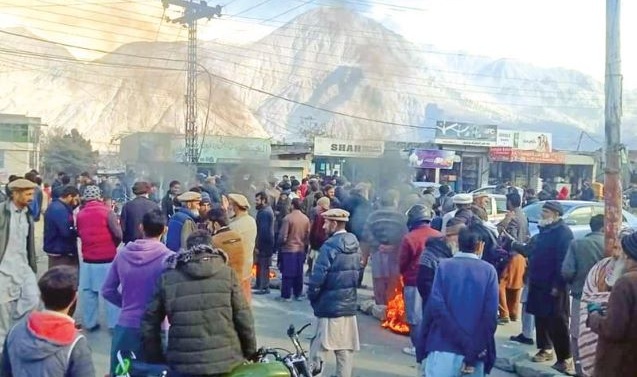 GILGIT: The people staged street protests and blocked roads here on Thursday against the supply of substandard wheat and reduction of subsidised wheat quota for Gilgit-Baltistan.

The protesters, including workers of the ruling PTI and opposition PPP and PML-N, gathered at the Sharea Quaid-i-Azam, blocked the key Zulfiqarabad Road and Karakoram Highway for hours, burned old tyres, and shouted slogans against the government and relevant authorities.

They insisted that substandard wheat had been supplied to the region for many months.

The protesters also said the federal government had reduced the subsidised wheat quota for GB.

Demonstrations were also held in Khomer area with the participants blocking the key road.

Adviser to the chief minister on law Syed Sohail Abbas showed up and told protesters that there was no change to the region’s subsidised wheat quota.

He said wheat was currently imported from Ukraine.

The adviser said the GB government would take up the related matters with the federal government for early resolution.

Also, a demonstration was staged in Juglote area on the matter. The protesters blocked the Karakoram Highway inconveniencing motorists and motorcyclists.

They set one-week deadline for the government for the resolution of issues and dispersed peacefully.

Meanwhile, owners of flour mills in Skardu went on a strike against the reduction of subsidised wheat quota.

The relevant officials held talks with protesters and promised them an early resolution of the issue.__Dawn.com