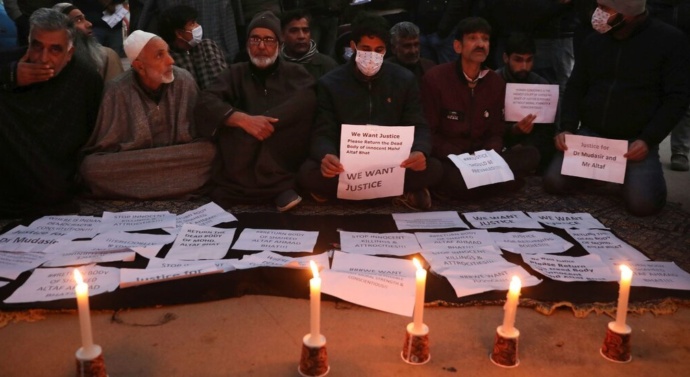 Srinagar, Indian-administered Kashmir – Following widespread outrage over the killing of four people, including at least two civilians, in a gun battle in Indian-administered Kashmir, the disputed region’s New Delhi-backed administration has ordered an inquiry into the incident.
The move announced on Thursday came a day after the families of the two civilians and activists protested in the main city of Srinagar, demanding their bodies be returned to them for their burial according to Islamic traditions.
Police detained more than a dozen relatives of the two civilians – trader Altaf Ahmad Bhat, 48, and Mudasir Gul, a 40-year-old dental surgeon and real estate dealer – killed in the controversial gunfight. They were released late on Wednesday night.
Police officials alleged a third person killed in the incident, identified as 22-year-old Amir Magray, was an armed rebel, but his family said he was a labourer. The fourth slain man was identified by the police as a Pakistani national, but the authorities offered no evidence.
Police said Bhat and Gul died in the crossfire between the Indian forces and the suspected rebels at a shopping centre in Srinagar’s Hyderpora area on Monday evening.
However, their families dismissed the claim, saying the two men were used as human shields and killed in cold blood by the Indian forces during the standoff.
In a tweet, the region’s Governor Manoj Sinha said a magisterial inquiry will be conducted into the incident. “It will ensure there is no injustice,” he posted, without providing further details.
But the families of the civilians and Kashmiri activists have rejected the announcement, calling it a “mere eyewash” to calm the rising tempers in the region over the killings.
“We are not hopeful of any justice. Our only demand is getting the body of our family member,” one of Bhat’s relatives told Al Jazeera on condition of anonymity, adding that they have “little hope of justice”.
Human rights activist Parvez Imroz of the Jammu and Kashmir Coalition of Civil Society (JKCCCS) said the inquiry was a “government ritual to divert attention from the civilian killings”.
“These inquiries have no credibility and are a mere eyewash,” Imroz told Al Jazeera. “They have been ordering these inquiries for the last 30 years with no outcome. The inquiry officers are government servants and not independent.”
The All Parties Hurriyat Conference (APHC), an umbrella group of the separatists in Indian-administered Kashmir which demands either the Himalayan region’s merger with Pakistan or the formation of an independent state, has called for a shutdown in the region on Friday.
The shutdown call by the group is their first in nearly two years.
“[…] the tragedy that has struck the families of innocent civilians killed in the Hyderpora staged encounter is so tormenting that its pain has stunned the people of Kashmir,” said a statement released by the APHC on Thursday.