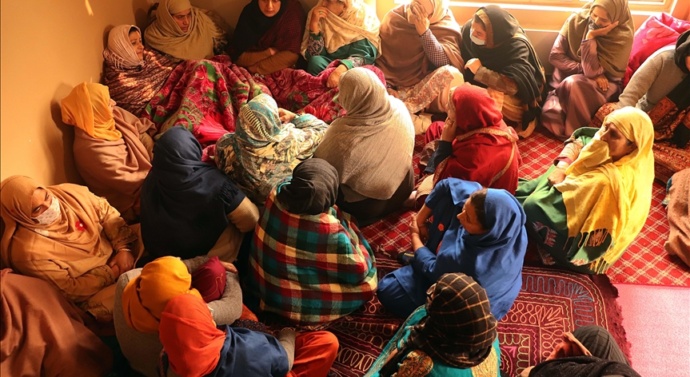 Srinagar, Indian-administered Kashmir – A day after Indian armed forces claimed to have killed two suspected rebels and their “associates” in a gun battle in Indian-administered Kashmir, the families of at least three slain men say it was a “cold-blooded murder of innocent civilians” and are demanding their bodies be returned to them.
Police say the gun battle in Hyderpora locality in the region’s main city of Srinagar began on Monday evening after police received a tip-off about the presence of rebels in a shopping centre.
In the battle that lasted for hours, the police said they killed two suspected rebels and claimed two others – businessman Altaf Ahmad Bhat, 48, who owned the shopping centre, and Mudasir Gul, 40, a dental surgeon who was also into real estate – were killed in the crossfire.
Vijay Kumar, inspector general of police in the disputed region, told reporters during a news conference on Tuesday that the two civilians were called to locate the rooms in which the suspected rebels were believed to be hiding. He said the two men “knocked on the door but the militants did not answer”.
“After a while, they knocked again and this time the militants opened the door and fired from a pistol. Our people also fired in self-defence,” Kumar said, adding that one of the two “terrorists” killed in the gunfight was a local named Amir Magray and another an unidentified Pakistani national.
Kumar claimed Bhat owned a cement shop in the shopping centre and had rented out three rooms to Gul.
“Mudasir [Gul] was running an unauthorised call centre there. He was a top terrorist associate. The terrorists used Altaf’s building and we can also count it as a case of harbouring militants,” he said.
But the families of at least three of those killed and witnesses to the killings rejected the police claims and alleged the two civilians were used as “human shields” during the gun battle.
A witness, who did not want to be named, said he saw Gul and Bhat being used “as a human shield by the Indian forces during the search operation in the building”.
“The police assembled us all at one place and took away our mobile phones. Bhat was taken away by them three times. While they allowed him to come back twice, he didn’t return the third time. Gul was also taken away by the forces. Then in some time, we heard firings,” he said.
At Bhat’s home in Srinagar’s Barzulla locality, his two daughters – Noha, 15, and Naifa, 13 – remain in grief and shock. Their brother Ibaad, seven, is too young to comprehend the loss.
“In the morning, my father dropped me off for my tuition classes. At 4pm, I called and asked him to buy me pastry. He would normally return home by 6pm. But when I called him again, he did not pick up. Soon, the phone was switched off,” Noha told Al Jazeera.
The Indian authorities refused to hand over the bodies to the families and buried them in a graveyard 80km (50 miles) away in Kupwara district along the border with Pakistan.
According to a new government policy, suspected Kashmiri rebels killed in gun battles with the security forces are buried in faraway graveyards to prevent large gatherings or mass protests on their funerals. In some cases, authorities have also denied handing over the bodies of civilians allegedly killed by the forces.
“We just want to give a dignified burial to our father. We want his grave to be near our home. We are not even asking for justice,” said Noha.
Their family said the two sisters have not eaten anything since their father’s killing on Monday.
“We will not eat until we are given our father’s body,” Naifa told Al Jazeera on Tuesday.
“When we protested and asked a police official, ‘Uncle, give my father’s body’, he laughed shamelessly. I froze and did not know how to respond. How could they kill our father, and bury him so away from us?”
Gul’s family protested in Srinagar on Tuesday and demanded the return of his body.
“He came home in the morning and got candies and biscuits for his two sons, aged seven and 10. The kids were happy to see their Baba [father]. Now, they have killed him and even charge him with militancy links. This is zulm [injustice],” said one of his relatives who did not want to be identified.