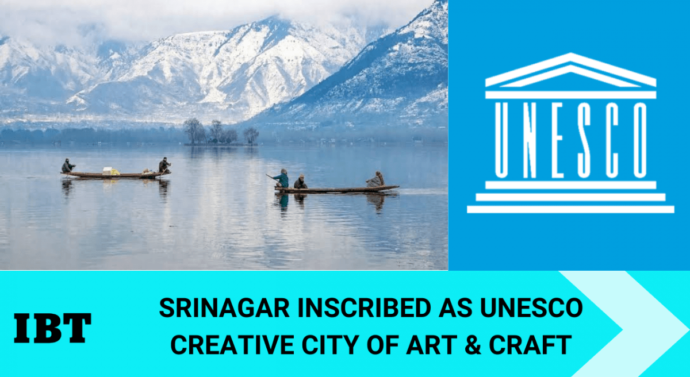 Srinagar: Srinagar has made it to the prestigious list of the UNESCO creative cities network for craft and folk art in a huge recognition for the centuries-old craft and heritage of Jammu and Kashmir.
Prime Minister Narendra Modi congratulated the people of J&K for the recognition of vibrant cultural ethos of Srinagar.
“Delighted that beautiful Srinagar joins the @UNESCO Creative Cities Network (UCCN) with a special mention for its craft and folk art. It is a fitting recognition for the vibrant cultural ethos of Srinagar. Congratulations to the people of Jammu and Kashmir,” PM Modi tweeted.
The announcement was made by the UNESCO on its website on Monday. The 49 cities were added to the network of 246 cities following their designation by UNESCO Director-General Audrey Azoulay.
Saleem Baig, Convenor of INTACH (J&K Chapter), said they have been preparing dossier for this recognition for last four years and making it UNESCO list is huge recognition of artisans of Kashmir who have kept the centuries old craft alive.
“Its a huge recognition of Kashmiri craft and heritage. Its recognition of identity of Kashmir, its craftsmen who sustained tradition for centuries,” said Mr Baig.
“We were left out in 2019. This time there were two cities recommended for the recognition – Srinagar and Gwalior. UNESCO decided to select Srinagar this time,” he added.
Meanwhile, Mayor of Srinagar Junaid Azim Mattu took to Twitter to announce Srinagar’s inclusion in the list. “GREAT NEWS FOR SRINAGAR! #Srinagar has been inscribed as @UNESCO ”Creative City of Art and Craft”. The the only city from India to make it to the list!” Mr Mattu claimed.