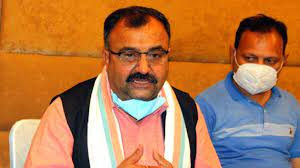 Srinagar, Indian-administered Kashmir – A politician belonging to the right-wing Bharatiya Janata Party (BJP) in Indian-administered Kashmir has been booked for hate speech after he called on his supporters to “skin them alive” – a reference to the region’s Muslims.
In a video that went viral, Vikram Randhawa, a former legislator from the disputed region’s Jammu area, purportedly called for violence against the Kashmiri Muslims who cheered for the Pakistani cricket team in a match of the ongoing T20 World Cup in the United Arab Emirates.
The Himalayan territory of Kashmir is claimed by both India and Pakistan, who rule over parts of it. The decades-old conflict between the two South Asian nuclear powers over Kashmir has intensified since Prime Minister Narendra Modi’s BJP came to power seven years ago.
The conflict extends to sports, with cricket matches between the two nations adding to the tensions. Following India’s humiliating 10-wicket loss to Pakistan on October 24, a number of Kashmiris were attacked and terror cases were filed against students in the disputed region.
In the BJP-ruled Uttar Pradesh state, sedition charges were filed against three students arrested in Agra city for supporting the Pakistani cricket team.
In the video tweeted on Monday by a Muslim politician from Kashmir, Randhawa could be seen advocating violence against the Kashmiris who support Pakistan.
“They have an affection for Pakistan in their blood. Agencies are active. They must have taken note of it … Whoever is involved in it, each one of them should be skinned alive,” he purportedly says in the video, which has not been independently verified by Al Jazeera.
The BJP leader asked why Kashmiris did not celebrate Pakistan’s victory against the “infidel” New Zealand with the same fervour as they did when India lost.
“Yesterday [October 26], Pakistan won from a kafir [infidel] country but Kashmiris didn’t celebrate as if their mother had died. Where had they all died? Why didn’t they cheer for Pakistan,” he says in the video.
The BJP politician said Kashmiri Muslim parents should realise they have given birth to “ungrateful children”.
“Those who are involved in these activities should be treated in a way that their coming generations too remember the result of raising anti-India slogans or pro-Pakistan slogans on Indian soil.”