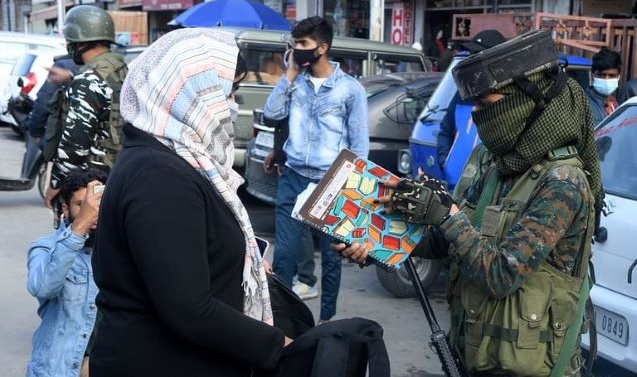 Srinagar: To further strengthen the security grid in Srinagar, increased measures that include more makeshift bunkers have come up in parts of the city. Officials said these preventive steps have been taken to “keep inimical elements at bay”.

The makeshift bunkers have come up at Barzulla, Jawahar Nagar and at some other places. They are manned by the Central Reserve Police Force (CRPF).

Official sources said that putting up more measures in the city was decided after recent targeted killings by militants. They said that steps have been taken as a part of “Area Domination”.

“The terrorists have shown that they are moving from one area to another within no time after committing terror crimes,” a senior police officer told Greater Kashmir.

“It can only be checked by area domination and cutting the free movement.”

At the same time one of the old Bunkers near Iqbal Park here has been removed. “ These are all makeshift bunkers and are aligned from time to time,” the officer said. “ We are also making every effort so that the masses do not feel inconvenience” the officer added.

The makeshift bunkers have also come along Bypass and some other places. Besides, many mobile bunkers of police and paramilitary forces are seen in standby mode at several places in Srinagar. The mobile bunkers are also stationed at TRC crossing, Lal Chowk, Jehangir Chowk, M A Road, Bemina, Parimpora, Bypass, the joint teams of police and CRPF could be seen carrying out random frisking.

“Around the Bypass we are carrying out reorganisation of deployment on the stretch to ensure safety of security vehicles and forces passing through the area,” a CRPF official said.

In 2010, more than 50 security pickets and bunkers were removed in Srinagar on the recommendations made by an all-party delegation visiting Kashmir that year.

Security agencies, officials said they have enhanced surveillance and a fully drone-based surveillance system has been put in place. “Every measure has been taken to keep inimical elements at bay,” the senior officer said, adding that human intelligence has also been strengthened.

“People are there for round-the-clock surveillance,” the officer said.