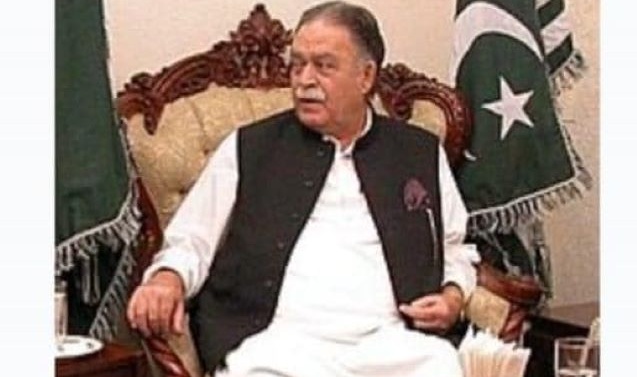 MUZAFFARABAD: Veteran Kashmiri leader Sardar Sikandar Hayat, who ruled Azad Jammu and Kashmir (AJK) twice as prime minister and once as president, breathed his last in his hometown Kotli on Saturday. He was 87.

Mr Hayat, who was diabetic and a cardiac patient, developed chest pain at about 9pm at his residence in Kotli city after his sugar level dropped and was rushed to the district headquarters hospital where doctors pronounced him dead on arrival.

He was born in Domaal Rajput tribe in Karela Majhan village of Mendhar tehsil of the erstwhile princely state of Jammu and Kashmir in June 1934. This area became part of AJK after the liberation movement of 1947 and is known as Nakyal tehsil. His father Sardar Fateh Mohammad Karelvi had quit the service of the Poonch police to play an active political role in the Muslim Conference and was also elected as a member of the Jammu and Kashmir Praja Sabha (People’s Assembly) from the Mendhar tehsil of Poonch in 1935.

Mr Hayat earned his LLB degree from Punjab University and took active part in politics from the platform of Muslim Conference (MC). His first electoral venture was his election as local council member under the basic democracy system in the early 1960s.

In 1970, he was elected to the legislative assembly under the presidential form of government and served in the cabinet of President Sardar Abdul Qayyum as senior minister, holding the portfolio of revenue department.

In 1974, the presidential form of government in AJK was replaced by the parliamentary form of government. But the MC boycotted the 1975 polls “anticipating rigging by the Peoples Party” and joined hands with the opposition parties of Pakistan that had then formed Pakistan National Alliance (PNA) against the government of Zulfikar Ali Bhutto. Mr Hayat was deputy secretary general of PNA and after the arrest of all of its leadership remained its acting secretary general for quite some time.

In the meantime, Mr Hayat had been chosen as president of the MC that after gaining majority in the 1985 polls got him elected as leader of the house (prime minister) while Sardar Qayyum became president of the state.

Mr Hayat ran the government as a strict administrator from 1985 to 1990 and did not allow anyone to meddle in the affairs of the government. In 1991, MC lost to Pakistan Peoples Party and he held the office of the leader of the opposition. The PPP government lasted only nine or so months due to the premature dissolution of the assembly by the then premier Mumtaz Hussain Rathore. Though Mr Hayat won his seat in the next (1991) general elections, Sardar Abdul Qayyum decided to run the government himself by getting elected as MLA against a re­­served seat. Mr Hayat was then offered the office of president.

Towards the fag end of his five-year term, Mr Hayat resigned from the presidency only to get himself re-elected as president from the same MC-dominated assembly. The PPP that came to power in 1996 removed him through a vote of no-confidence. The PPP government also saw a split of MC into Qayyum (Q) and Sikandar (S) factions. However, the factions united ahead of the 2001 polls to pave the way for its victory. When MC came to power, Pervez Musharraf gave his blessing to Mr Hayat and he was elected as prime minister for the second time.

In 2006, the MC again came to power but this time round Sardar Attique Ahmed Khan received Mr Musharraf’s blessing. Subsequently, Mr Hayat persuaded Pakistan Muslim League-Nawaz chief Nawaz Sharif to launch his party in AJK. Given his mercurial temperament, political pundits were predicting for quite some time that he would hardly continue his association with the PML-N and would instead switch over to either the PTI or his previous party. He brought the speculations to an end in February 2021 by re-joining MC. But the decision did not augur well for his politics, as both his son and brother, who contested July 25 polls from the platform, lost to PPP candidates.

Mr Hayat is survived by two sons and nine daughters and many grandchildren. His funeral will be held at 11am on Sunday in Kotli city and later at 4pm in his Nakyal town where he will be laid to rest.