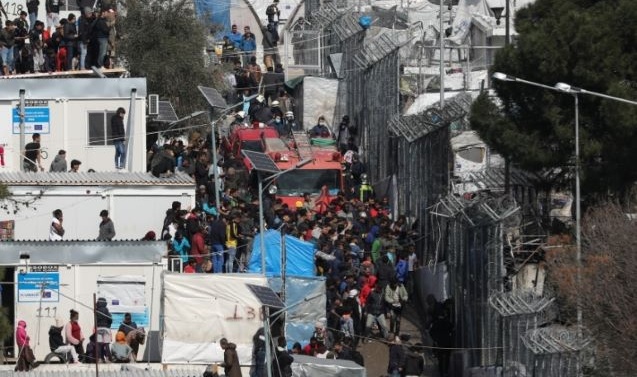 Samos, Greece – Workers are still laying down asphalt in the high-security end of the camp where deportees will be held, but the overall shape of a new, 15-hectare (37-acre) refugee reception centre on the Greek island of Samos is clear.

There are shared play areas for football, basketball and volleyball. A purple area is set aside for COVID-19 quarantine. A separate section will process new arrivals.

Some of the 350 asylum seekers bussed here earlier this week were grateful to be moved from an old camp in Samos’ main town of Vathy, which is set to be bulldozed.

People arriving from Turkey, 1.5km (just under a mile) away across the Aegean Sea, had built a shanty town of tarpaulin huts nailed onto frames of salvaged lumber.

‘In the new camp… new life’

Agong Patience arrived from Cameroon a month ago.

“In the new camp, God is beginning everything with new life,” she said. “There will be a light, a special light that God will make there, because he has moved us from the old site to the new site.”

As she organised her kitchen utensils, Fatima Wakinchila, from the Democratic Republic of the Congo, pointed to her new shelves.

“Everything is organised,” she said. “I have two stovetops. It’s clean. Thank you, Greece.”

This reception centre is the first of five the European Union is building on east Aegean islands, at a cost of about $220m.

Together, they will hold up to 13,500 people. The aim is to provide asylum seekers with humane living conditions while their cases are decided, and put an end to pictures of squalor and disorganisation that have embarrassed Europe.

“The situation in the old camp was terrible because we were living with rats and no lights,” says Thompson Ewoma, who landed two years ago as a child, without family, from Cameroon.

“In the wintertime, we bathed in cold water because there was no electric heater. We went to a container to bathe in hot water, but we had some problems.”

But Ewoma also worries that the thyme-covered mountaintop that the Closed, Controlled, Access Centre of Samos, as the new camp is called, sits on is 7km (four miles) from Vathy.

Outside its double chain-link fence topped with barbed wire, there is no one to talk to, nothing to eat and nowhere to sit down.

“When I first arrived, this place would be amazing,” Ewoma said, surveying the barrack-like rows of mobile houses with solar water heaters and air conditioning.

“But now I have been for two years in the city. I used to go down to the city to swim … to relieve my stress, I used to talk to people… So I’m not really happy.”

Some aid groups are trying to rectify that

Doctors Without Borders (MSF) have landscaped a clinic five minutes’ walk from the camp.

Samos Volunteers, which runs informal education and recreation programmes, is establishing a presence on a nearby rocky field.

As camp functionaries showed refugees how to operate card readers and fingerprint scanners on steel turnstile doors, members of Samos Volunteers stapled windbreaker fabric onto a wall made of wooden pallets.

“It’s still a camp,” said Bogdan Andrei, who has worked with Samos Volunteers for five years. “It does offer better material living conditions, but other than that there’s no improvement. I would say even bringing people in such an isolated place could have an even stronger impact on their wellbeing, on their mental health, on their capacity to rebuild their life and integrate.”

Manos Logothetis, secretary-general of the First Reception Service, the government agency that runs the camps, hopes refugees and Greek merchants will heed his call to set up small businesses inside the camp to sell groceries and services to residents.

But that, some fear, will only reinforce the camp’s isolation.

Giulia Cicoli is one of them. She founded Still I Rise, an informal education centre that has worked hard to enrol refugee minors in formal Greek education. She believes that without interaction with local society, refugees are denied the opportunity to take the next steps in their lives. So she insists on bussing her wards to premises established in Vathy.

“The conditions here have got so bad, so inhumane, that now, a closed place that has – hey – a bed, a shower and electricity, is great. And for two weeks everybody is OK with that,” Cicoli said, referring to the initial registration period.

The Greek government has pledged to adjudicate new asylum cases within two months. After that, believes Cicoli, the trouble will begin.

“So you do your interview, you’re rejected in a very short time and then you are kept in detention waiting to be deported back to Turkey,” she said.

Since March last year, Turkey has refused to readmit refugees whose asylum applications have been rejected in the EU.

This runs counter to its obligations under an agreement struck with the bloc in 2016, and has led to unrest on Greece’s eastern Aegean islands, which are the main entry point for refugees coming from Turkey.

The government’s response has been to decongest the islands, build new camps far from populated areas and speed up processing. Its emphasis on the islands is efficiency, not integration.

“You cannot stay in that place for 18 months. You cannot even stay for two months,” said Cicoli.

She also worries that new outbreaks of coronavirus could be used to lock the camp down.

Logothetis says 2,500 deportees are waiting to return to Turkey.

“If Turkey rejects them and says: ‘No, I am not taking them back,’ then the only chance we have is to send them back to their own country. So if there is a delay of these 18 months that you describe, it is not on us.”

In practice, deportations are difficult because a deportee’s home country has to recognise them as a citizen and accept them. If this does not happen before the 18 months are up, Greece releases deportees with orders to leave the country.

That allows them to get in touch with smugglers to go deeper into Europe.

The New Democracy government’s aversion to integration is evident in its own figures.

There is a gaping hole of more than 31,812 absences the government figures do not explain.

Andrei says the answer is simple.

“We know very well that there is not a proper integration programme in Greece, and even people who have received asylum here are moving on to other countries.”__Courtesy Al Jazeera