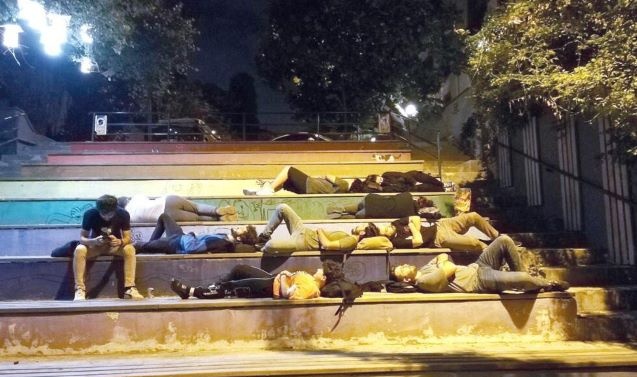 With the start of face-to-face education after a year of hiatus due to the pandemic, the price of renting a house in Istanbul is exploding unbelievably, leaving students in a state of turmoil.

Finding an affordable apartment in the Turkish metropolis with over 16 million population is becoming what can be called a demoralizing and gladiatorial experience for students, which eventually led them to protest against the increasing rent prices in an unusual way.

Having difficulties in finding a decent place to stay due to the sky-high dormitory and rental apartment costs, a group of students came together in Istanbul’s Kadıköy district and spent the night sleeping on the benches in the Yoğurtçu Park in Moda neighborhood.

“We do not give an exaggerated reaction; we do not sleep on the streets for our pleasure instead of being your neighbor. We tell the common story of millions of students,” the group said, calling itself a Barınamıyoruz (We Can’t Take Shelter) Movement.

The students told their stories, difficult experiences and challenges in finding a proper and liveable house in Istanbul, noting that they meet on benches which are seen as the most accessible option to make their voices heard

“Instead of windowless, dark and narrow rooms that we can find for thousands of Turkish Liras at best, we prefer to spend time with our friends in the parks under the wide sky in order to be a part of a solution to the problem,” they said.

Students announced that they would continue to sleep in the parks in the coming days.__Hurriyet