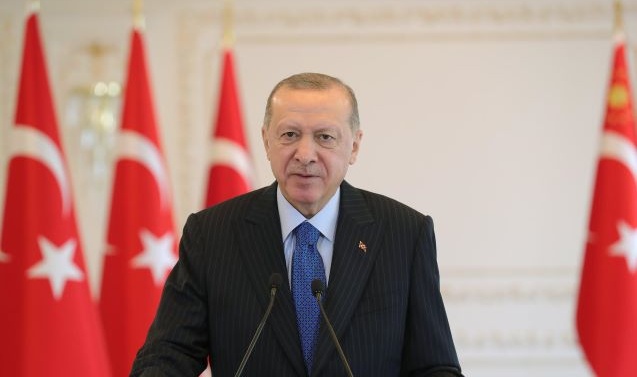 Turkish President Recep Tayyip Erdogan on Tuesday called for a solution to the decades-old Kashmir dispute between India and Pakistan on the basis of the United Nations resolutions.

Addressing the 76th session of the UN General Assembly (UNGA), he said in a wide-ranging speech to the 193-member assembly: “We maintain our stance in favour of solving the ongoing problem in Kashmir for 74 years, through dialogue between the parties and within the framework of relevant United Nations resolutions.”

President Erdogan has consistently raised the Kashmir issue at the annual sessions of the UNGA.

At the 75th session, the Turkish leader had said: “The Kashmir conflict, which is also key to the stability and peace in South Asia, is still a burning issue. Steps taken following the abolition of the special status of [occupied] Jammu and Kashmir further complicated the problem.” His espousal of the Kashmir cause has evoked strong protests from India, which claims that Jammu and Kashmir is its “internal matter”.

President Erdogan’s message, he said, is aimed at the promotion of dialogue among all parties to the dispute. “This is the only means of achieving a genuine and lasting peace in this volatile conflict,” Fai said, adding that Kashmiri people have suffered too long.

“They demand and they deserve peace,” he added.

Over 100 world leaders are participating in the UNGA debate in person, with attendance in the assembly’s iconic hall scaled down as a precaution against the coronavirus pandemic.

In a statement, Muhammad Farooq Rehmani deplored India’s volt-face over the Saudi offer for mediation on the Kashmir dispute. He said that the Modi regime believed in and practiced tyrannical methods vis-à-vis Jammu and Kashmir. He said undoubtedly the Hindutva regime had plunged the entire population of IIOJK as well as the minorities in great risk by playing with their life, honour, property and demography, creating horrific conditions for them.

He deplored that the Modi regime was not allowing the people to move freely in Srinagar in the vicinity of late Syed Ali Gilani’s grave, which was under strict vigilance and nobody was allowed inside the house of the veteran leader without recording his bio-data.

Prime Minister Imran Khan will address the assembly on September 24 (Friday) through a video-link.__Courtesy Daily Times