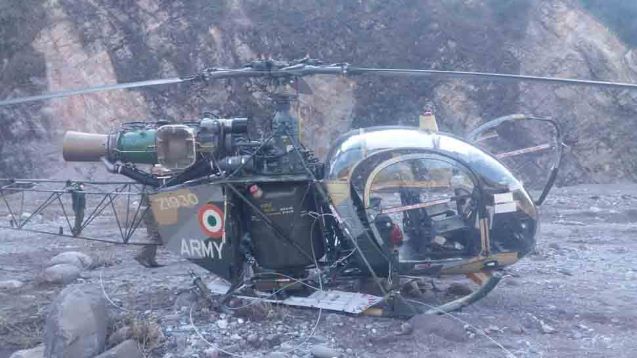 Jammu: Two Army pilots died during a crash landing of a Cheetah helicopter in Patnitop area of Udhampur.

“The pilots namely Major Rohit Kumar, and Major Anuj Rajput succumbed to the injuries they had suffered in a crash landing of a Cheetah helicopter,” a defence spokesperson said.

Both the pilots, according to the defence officials, were on a training sortie. They took off from Nagrota during morning hours. However, it was due to the bad weather conditions that they had to make a crash landing at Shiv Garh Dhar (Udhampur).

“There was low visibility due to excess fog in the Patnitop area,” the defence official said.

Soon after getting the report of crash landing, rescue teams were rushed to the spot and the police teams also reached at Shiv Garh Dhar to evacuate the injured pilots.

“Both the pilots were evacuated immediately by the rescue teams and they were shifted to the Batote hospital. Their condition was stated to be critical. However, they could not survive the fatal incident. Unfortunately, both the brave pilots succumbed,” said the defence officials.