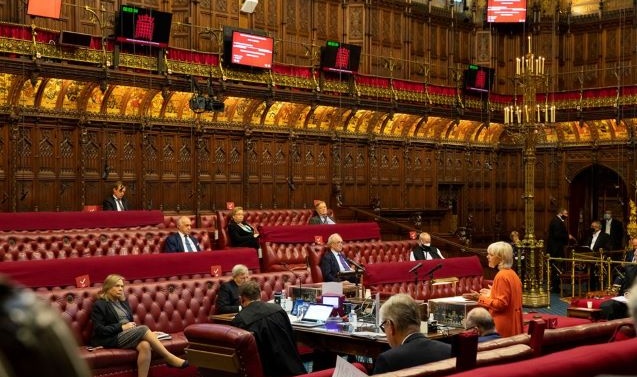 Fahim Kayani, President, Tehreek-e-Kashmir UK, has said that a debate on human rights violations in Jammu and Kashmir (J&K) would be held in the House of Commons in Britain on September 23.

Fahim Kayani in a press briefing in London said, this timely debate on Kashmir in the UK Parliament will pave the way at an international level for exposing brutal Indian actions, the forced burial of the veteran Kashmiri leader Syed Ali Gilani, custodial killing of Muhammad Ashraf Sehrai, fake encounters, brutal siege of Kashmir, mass graves, mass rape, media gag, and illegal detention of thousands of Kashmiris especially political prisoners, Kashmir Media Service (KMS) reported. Tehreek-e-Kashmir UK President urged the British-Pakistani Kashmiri community to ensure the participation of your MPs in the Kashmir debate in the House of Commons. He demanded an investigation into Indian actions pertaining to the burial of 92-year-old Syed Ali Gilani, whose body was kidnapped, desecrated and buried in the middle of the night against his own final wishes and the wishes of his family.

Furthermore, another prominent leader, late Ashraf Sehrai was detained on fake charges and denied medical treatment while in custody, he added. His family was forced to bury him in the dead of night despite. He pointed out that these actions are in contravention of the Geneva Conventions of 1949 and such actions constitute to war crimes. Khawaja Muhammad Suleiman, Director TeK Kashmir information and research centre said that the debate on Kashmir in the British Parliament will be broadcast live on BBC.

The House will sit from 9.30am on Thursday. MPs will ask questions to the Chancellor of the Duchy of Lancaster and Minister for the Cabinet Office, Steve Barclay. Business Questions to the Leader of the House will follow. Main business will start with a general debate on Baby Loss Awareness Week. There will also be a debate on a motion on Human rights in Kashmir.

At the close of business on Thursday, the House of Commons will rise for Conference recess and will next sit on October 18.