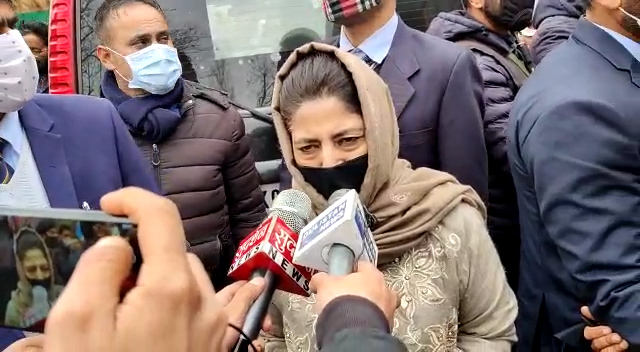 Jammu: Peoples Democratic Party (PDP) president and former Chief Minister Mehbooba Mufti on Sunday yet again raked up demand for “Self-rule” for J&K as a “panacea for all its problems, including all-pervasive unemployment issue.”

While addressing party delegates at PDP office in Jammu, Mehbooba averred that her demand would “send alarm signals and she would be branded as an anti-national”, but actually it was a model, which India could showcase in SAARC, and take pride in it.

“This was Mufti Sahib’s idea and belief given J&K’s strategic location. J&K can be established as a “Gateway of Central Asia” by opening its routes leading to various Central Asian countries. He would suggest the opening of its bank branches in all the countries. They discuss Afghanistan in QUAD, BRICS but not in SAARC, which they have made defunct. Discussing this region’s issues at those forums amount to “Begani Shaadi Mein Abdullah Diwana,” Mehbooba stated while taking a direct dig at the central leadership.

She minced no words in targetting BJP and its leadership at the Centre as she said that they would create fear-psychosis in the minds of the electorate by raking up slogans of “Hindus in danger” and would talk about Pakistan and Afghanistan as “potential threats.”

“These noises would further grow in the wake of ensuing UP elections. Actually Hindustan and secularism is in danger due to their actions. Ironically they would not talk about China, which has already captured parts of Ladakh and other areas. They describe how Taliban are committing atrocities upon women but they are not doing introspection of their (women’s) situation in our country, where they have demolished everything created in last 70 years. They have sold out country’s assets and have demolished all vital institutions,” Mehbooba stated.

“The biggest problem here in J&K at the moment is the unemployment. I was told that even the youth with PhD qualification were applying for the posts of SPOs in Rajouri and Poonch. They would not get that even. This frustration was leading to the youth here to drugs or extreme steps like suicide in both the regions. Though they used to describe Article 370 as an impediment in the way of employment opportunities to the youth and development,” the former Chief Minister averred.

“I’m happy that now even the people of J&K have realised the fact. Article 370 was not just the custodian of citizenship rights, identity of J&K citizens but it also acted as the protective gear vis-a-vis J&K citizens’ lands and jobs. They (ruling dispensation at the Centre) have dismantled this shield, provided by none else but late Maharaja of J&K to its citizens,” PDP president asserted.

At this point, she even invoked her late father and the former Chief Minister Mufti Mohammed Sayeed recalling that he used to regret the migration of Kashmiri Pandits from the Valley at the advent of militancy.

“He would say – this was unfortunate that we could not protect the interests of a miniscule minority of Kashmiri Pandits and could not help them staying back in the Valley when militancy started. Similarly our J&K was an only Muslim majority state in India. It too could have exercised other option. But it chose secular India, which belonged to Gandhi, Nehru, Ambedkar, Sir Syed and Maulana Abul Kalam Azad. It preferred India thinking that its secularism and communal harmony would safeguard its unique identity and it would be loved and nourished for that as in case of other option, J&K would have been just one of the Muslim states. This was agreed also. J&K became part of India because of those leaders,” Mehbooba said.

“Had present day BJP been in power at the time of partition, J&K would not have been part of India, would not have acceded to it. Because they (BJP) only know to disintegrate and not to unite. It was the magnanimity of Pandit Nehru that he agreed to the conditions of J&K leadership of that era with regard to protection of land, jobs through Article 370, which evolved through the law enacted by Maharaja, separate constitution and flag, without compromising its respect for Indian Constitution. The decision of J&K leadership to be with India with certain condition was respected. So what we got (Art 370, 35-A), we got through Indian Constitution. It was not granted by Pakistan or China,” she added.

“Hence we all have to gear up to get everything back and tell them – enough is enough. We cannot allow them to destroy us further,” she asserted. Later talking to reporters, she qualified her earlier statement that she would not contest elections till the restoration of Article 370 stating that her party would participate in polls. But she ruled out any possibility of alliance with the BJP.

“But presently, the scenario is depressing. Now instead of giving jobs, they are snatching them. Anganwari and other workers have been disengaged. A feeling of fear and trepidation is prevailing everywhere. They are harassing employees, reducing their retirement age to 48 years. They are trying to create impression – all is well in J&K. But reality is not that. They are taking away our inalienable rights even- including the right to protest,” Mehbooba averred.__Courtesy GK News