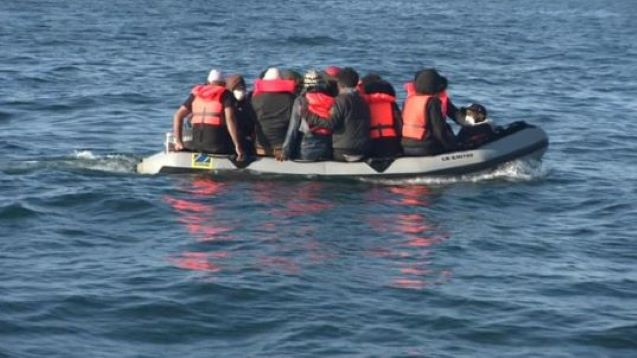 Migrants continue to arrive on UK shores after a steady stream of crossings since the weather conditions became more favourable.

Lifeboats from Hastings and Eastbourne have been deployed to “incidents” off the Sussex coast, the coastguard said.

Another search and rescue was launched earlier after a boat of migrants was spotted in the English Channel.

It comes as the home secretary prepares to discuss the number of small-boat crossings with her French counterpart.

The Home Office said “under 500” people arrived in small boats on Tuesday.

A Maritime and Coastguard Agency spokesman said on Wednesday it was “coordinating a search and rescue response to incidents off the East Sussex coast, working with Border Force and other partners”.

The spokesman added: “Lifeboats from Hastings and Eastbourne have been sent.”

A second search on Wednesday morning was carried out by Border Force, Dover RNLI lifeboat and the coastguard helicopter based in Lydd.

A lifeboat from Dungeness has also been launched, and migrants were seen being brought ashore at Dover, the BBC’s Simon Jones has reported.

On Monday, 785 people arrived in 27 boats while French authorities stopped 378 people from making the crossing, the Home Office confirmed.

Priti Patel and Interior Minister Gérald Darmanin are both due to attend a meeting of G7 ministers in London.

She has warned that Britain could withhold £54.2m it had promised to pay France to help deal with the problem, unless more boats are intercepted.