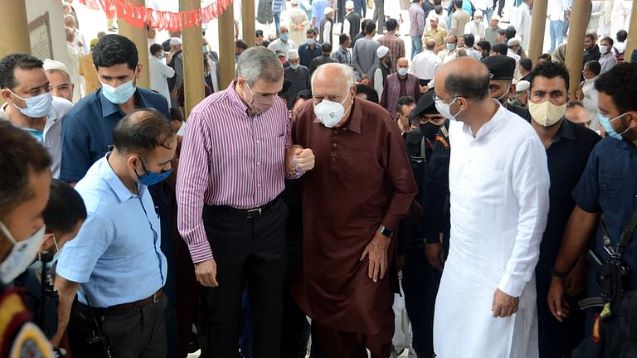 Srinagar: National Conference president Farooq Abdullah on Wednesday said his party is committed to the struggle for the restoration of Jammu and Kashmir’s statehood and special status but will contest elections whenever they are held in the union territory.

He was speaking to reporters after paying his respects at NC founder and his father Sheikh Mohammad Abdullah’s mausoleum at Naseem Bagh here on his 39th death anniversary.

The Centre had abrogated Article 370 of the Constitution and divided Jammu and Kashmir into two union territories on August 5, 2019. Article 370 granted special status to the erstwhile state.

Abdullah said the NC is committed to the struggle for the restoration of Jammu and Kashmir’s statehood and special status.

“We don’t know when elections will be held, but we are clear about it. We will contest elections whenever they are held in Jammu and Kashmir,” he said.

On the Taliban taking control of Afghanistan, the former Jammu and Kashmir chief minister said he hoped that they will respect human rights and seek friendly relations with all countries.

“The Taliban have taken over, and now they have to nurture the country. I hope that they (will) do justice with all,” Abdullah said.

“They should seek friendly relations with all countries,” he said.