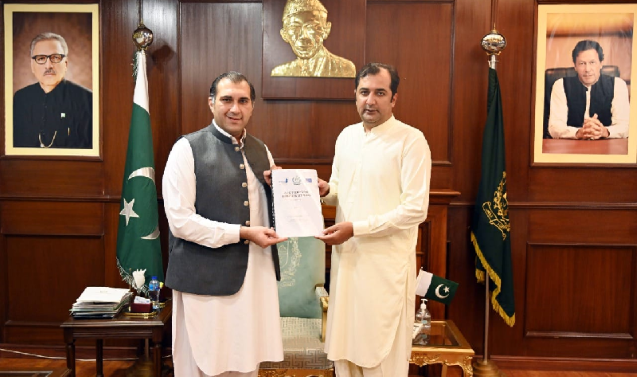 GILGIT: Gilgit-Baltistan (G-B) Chief Minister Khalid Khurshid on Friday announced that the first human rights policy will be launched next month, saying that the government aims to strengthen the protection and promotion of citizens’ rights in the region.

“This government will make every effort to reflect the voices and concerns of the people of G-B in their first human rights policy,” the chief minister said during a meeting with Barrister Salman Afridi, the senior policy expert for the European Union-funded ‘Huqooq-e-Pakistan’ (HeP) programme.

The HeP is an EU-funded programme with the objective of supporting the continued efforts of the government of Pakistan for the promotion of human rights.

The purpose of the programme is to strengthen the institutional and policy framework at federal and provincial levels for the promotion and protection of human rights.

During the meeting, Afridi presented a working draft of the Gilgit-Baltistan Human Rights Policy which has been developed by the HeP project under the leadership of Executive Director Ali Dayan Hasan.

The policy draft was developed after extensive engagement with key stakeholders in G-B, including government departments, civil society organisations and development agencies.

Afridi outlined that the objective of the G-B Human Rights Policy is to mainstream human rights in the region’s governance structures in order to safeguard and promote all civil, political, social, cultural and economic rights that the people of G-B are entitled to.

“Gilgit-Baltistan will have its human rights policy through a province-led process to be formulated with the support of the chief minister under the guidance of the Social Welfare and Human Rights Department. This policy is aimed at mainstreaming human rights standards throughout the administrative and government structures at the provincial level,” Barrister Afridi said.

The chief minister endorsed the HeP-led policy development process and lauded the Huqooq-e-Pakistan team’s efforts towards mainstreaming human rights safeguards in the governance and policy framework of G-B. The CM directed the HeP team to further refine the policy after holding further consultations with G-B’s government departments, civil society organisations and development agencies.

Besides formulation of first-ever human rights policy, the project has undertaken several other initiatives in G-B to strengthen human rights protection mechanisms.

“In addition to G-B’s first-ever human rights policy with a focus on environment and human rights, HeP has supported deployment of young experts in the Social Welfare and Human Rights Department to bridge human-resource gaps,” Huqooq-e-Pakistan’s Hasan explained.

“Several trainings have also been organised on Pakistan’s international human rights reporting obligations, personal development and leadership skills as well as other core skills,” Hasan said, adding that the project has also developed human rights knowledge base of G-B’s human rights-related departments through the provision of e-journals, e-databases and publications.__Tribune.com