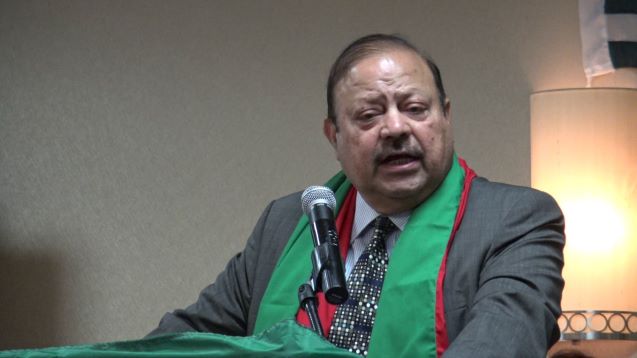 Barrister Sultan Mehmood Chaudhry took the oath of the office of the President of Azad Jammu and Kashmir (AJK) on Wednesday.

Addressing the audience after the swearing-in ceremony, the newly-elected President Mahmood expressed his resolve to make the liberation of Kashmir his first and the last priority.

He stated that he had earlier organized conferences on Kashmir all over the world and formed Kashmir Committees in the parliaments of different countries of the world and it was his promise to the oppressed people of IOJK to work for the liberation of Kashmir with much more vigor and enthusiasm.

He said former President of Azad Kashmir Sardar Masood Khan has also assured him that he will continue to guide him on the basis of his vast experience on the Kashmir issue at the international level.

Barrister Sultan said that in this month of August two years and twenty days ago, India had invaded Kashmir and had repealed Articles 370 and 35-A of its Constitution illegally and immorally.__The Nation