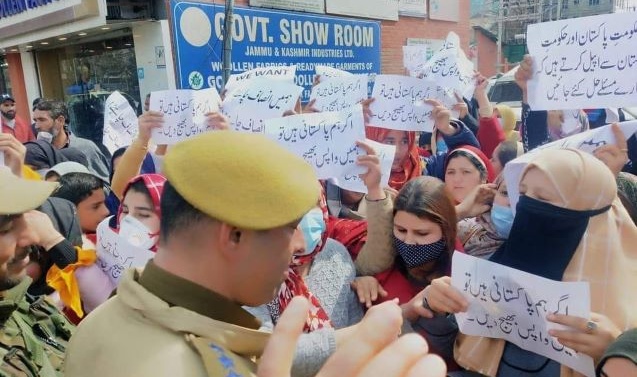 Eight years have passed and the 37-year-old resident of Kupwara in Indian-administered Kashmir has little hope she will ever make it to the house across the border.

Kashmir is divided into areas administered by India and Pakistan, who rule over parts of it but claim it in its entirety. A de facto border, called the Line of Control (LoC), divides the disputed region between the two nuclear powers.

For the past eight years, Rehman has been opening the window of her room in Kupwara’s Drugmulla village to look at the conifer-covered mountains.

“Beyond that lies my heart,” she told Al Jazeera. “I am like a caged bird, flapping my feathers with the steel frame and looking forward to flying back.”

As she looked wistfully outside the window, dusk fell, the mountains turned dark and her view vanished.

Rehman’s ordeal began in 2013 when she embarked on a journey to Indian-administered Kashmir with her husband and former rebel, Abdul Majeed Ahanger, and three children.

In the 1990s, hundreds of Kashmiri men crossed the LoC to join camps on the Pakistani side that were training Kashmiri rebels to fight against the Indian security forces.

The armed rebellion that began in 1989 aims to either merge India’s only Muslim-majority region with Pakistan or create an independent country.

Ahanger, now 42, had crossed the highly militarised LoC in 1999. He later decided to live with his relatives in Muzaffarabad, where he worked as a tailor.

In 2002, he married Rehman. No longer a rebel, he longed to return to his homeland and loved ones on the Indian side.

An opportunity arrived in 2010, when the government of Indian-administered Kashmir announced an amnesty programme for the ex-rebels who had crossed over to the Pakistani side, but had given up the armed rebellion “due to a change of heart and are willing to return”.

Rebels who went to Pakistan between January 1, 1989, and December 31, 2009, as well as their dependents, were eligible for rehabilitation, according to the policy.

The former rebels permitted to return were asked to enter India only through border checkpoints at Wagah-Attari in the western Indian state of Punjab, the Salamabad and Chakkan da Bagh crossings along the LoC, or through the airport in the capital, New Delhi.

But all the returnees avoided the designated points of return, either to evade the Pakistani security agencies who kept a close watch on them, or the Indian security forces who may arrest them.

In 2017, the government of Indian-administered Kashmir said at least 377 ex-rebels and 864 of their family members returned from Pakistan via Nepal and Bangladesh since the amnesty was announced seven years ago.

However, the government added, since none of the rebels had returned via the approved routes, they were not entitled to any benefits under the amnesty policy.

‘Don’t see light at end of this tunnel’

While planning the return to his home in Indian-administered Kashmir, Ahanger had assured Rehman they would return to Muzaffarabad within months.

The family of five took a flight to Kathmandu from Islamabad, crossed into India, and then switched buses and trains to reach Drugmulla village in Kupwara.

As soon as he reached home, Ahanger destroyed his family’s travel documents, including their Pakistani passports.

“It has been eight years since and I don’t see any light at the end of this tunnel,” Rehman told Al Jazeera.

She could not make it to Muzaffarabad when her father died in 2019. “I talk to my family using the messaging apps on my phone,” she said.

Today, Rehman regrets her decision to return to India and feels deceived.

“I don’t have a passport. My Pakistani passport was destroyed by my husband after coming here. I can’t get an Indian passport because I don’t have Indian citizenship,” she said.

The future of their children also worries her.

“Is there any guarantee that my husband’s past will not cast a shadow over my children? Will they be allowed to go abroad to study, to work, if they want to in future?” she asked.

Rehman asked why Kashmiri politicians married to Pakistani women are allowed to travel freely – an apparent reference to Sajjad Lone, a separatist-turned-pro-India politician.

“What are we being targeted for?” she asked Al Jazeera.

Rehman is one of nearly 370 women, either from Pakistan-administered Kashmir or from different parts of the Muslim-majority country, suffering the same fate on the Indian side of Kashmir.

Many of them feel their and their children’s futures are in limbo, with their husbands’ past stopping them from seeing their own families.

These women demand to either be deported to Pakistan or given Indian citizenship so they can legally travel to their country of birth and visit their loved ones.

In a desperate attempt earlier this month, scores of these women and their children marched towards the LoC in the Uri area of Indian-administered Kashmir’s Baramulla district and were detained briefly by the police for the act.

‘I feel so helpless here’

But instead of being able to return to her home in Pakistan-administered Kashmir’s Bhag district, she is forced to live in a rented room in Kupwara.

Like Ahanger, Bhat also crossed the border in the 1990s for arms training and later started leading a normal life. In 2012, they returned via Nepal.

“The government called back its boys but did they ever think about the women and children who were coming back with them?” she asked.

Bushra said her inability to see her family for years caused frequent tiffs with her in-laws, which ultimately led to the divorce in 2019.

A mother of two, she says she does not know if she can ever return to her homeland.

“Every night when I go to bed, I think of my home, my family and the life over there,” she said. “I dream of a morning, finding myself at home in Bhag. I feel so helpless here.”

Mehbooba Mufti, the last elected chief minister of Indian-administered Kashmir, told Al Jazeera that it was a “humanitarian issue” and must be sorted out by the authorities.

Mufti said she had first raised the issue in 2018 when she met Rajnath Singh, then India’s home minister, and more recently in a meeting with Prime Minister Narendra Modi.

“In the all-party meeting with the prime minister, I told him [Modi] that since you are talking to Pakistan about the ceasefire and other things, there are certain humanitarian issues that need to be sorted out, including the issue of these women,” she told Al Jazeera.

Mufti seconded the women’s demand that they should either be given Indian citizenship or allowed to go back to their homes.

“There is no other way out. Why should they suffer?”__Courtesy Al Jazeera