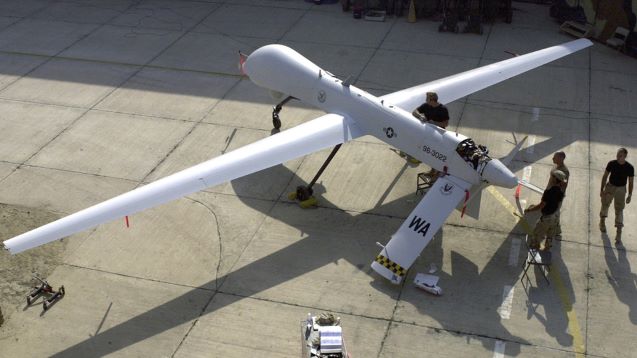 Daniel Hale, a former US Air Force intelligence analyst who leaked information about civilian deaths caused by drone strikes overseas, has been sentenced to almost four years in prison under the Espionage Act.

US District Judge Liam O’Grady passed the sentence on Tuesday in a federal court in Alexandria, Virginia, saying that the 45-month sentence was needed as a deterrent to others from disclosing government secrets. O’Grady told Hale he had other options than to share classified documents with a reporter.

Hale, 33, pleaded guilty in March to one count of violating the Espionage Act of 1917, admitting to “retention and transmission of national security information” and leaking 11 classified documents to a journalist. The documents were leaked to the Intercept, which published them in October 2015 as ‘The Drone Papers’.

Under the plea deal, Hale faced up to 10 years in prison – far less than the 50 years the original charges would have carried, had he gone to trial.

Other whistleblowers such as Edward Snowden, John Kiriakou, Daniel Ellsberg and WikiLeaks have advocated on Hale’s behalf, but prominent human rights organizations such as the ACLU and PEN have mostly remained silent. Freedom of the Press Foundation called his punishment “shamefully excessive.”

The ACLU reacted after the sentencing, saying Hale “helped the public learn about a lethal program that never should have been kept secret. He should be thanked, not sentenced as a spy.”

As Kiriakou told RT in April, prosecuting whistleblowers under the Espionage Act robs them of the opportunity to explain their motivations.

“He did it because he was exposing a war crime. He is not allowed to say that. And he really doesn’t have any chance of acquittal,” Kiriakou said.

While working as a private contractor, Hale leaked a number of documents to the Intercept’s Jeremy Scahill, showing the extent to which President Barack Obama’s drone warfare program in places like Afghanistan, Pakistan and Yemen resulted in civilian casualties.

Documents showed that, of the 200 people killed between January 2012 and February 2013, only 35 were the intended targets. During one five-month period, nearly 90% of those killed were innocents, who were nonetheless classified as “enemies killed in action.”

Hale is the third Intercept source to be arrested and put on trial by US authorities. The FBI’s Terry Albury and the NSA’s Reality Winner – only recently released on parole for good behavior – were both caught due to errors on part of the outlet’s staff. It wasn’t clear whether the same happened to Hale, but his attorney blamed “failure of source protection” for his 2014 arrest.__RT.com