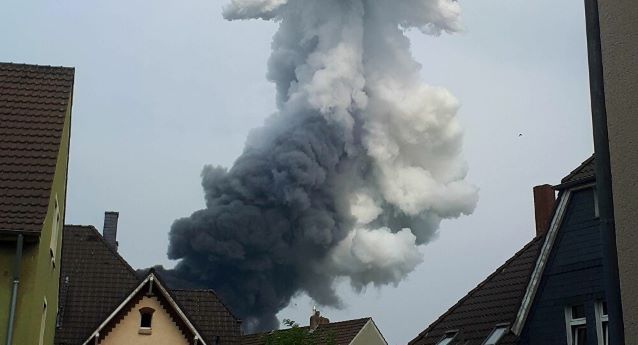 At least one person has been killed and four remain missing after an explosion at a chemical plant in Germany.

Officials in the city of Leverkusen say 16 people were injured in the blast, which happened at 09:40 local time (07:40 GMT).

The explosion triggered a fire that took several hours to put out. Plumes of black smoke were seen in the area.

Police have told local residents to stay inside and close windows and doors.

The cause of the blast at the Chempark waste incineration site is not yet known.

“We are deeply saddened by this tragic accident and the death of an employee,” Lars Friedrich, head of Chempark said.

Rescuers are searching for the missing.

Two of the injuries are thought to be serious, according to Chempark operator Currenta. All of those affected worked at the site.

Three tanks at the site were completely or partially destroyed, making it hard to determine where the explosion happened.

The sound of the blast could be heard several kilometres away. Police sealed off the surrounding area and closed a number of motorways nearby.

City Mayor Uwe Richrath said it was a “dark day for the people of Leverkusen”.

Playgrounds in two nearby neighbourhoods have been closed and residents have been told to rinse fruit and vegetables from their gardens before eating them.

However, the city of Leverkusen said any measures taken were just as a precaution and pollution levels were still “in the green”.__BBC