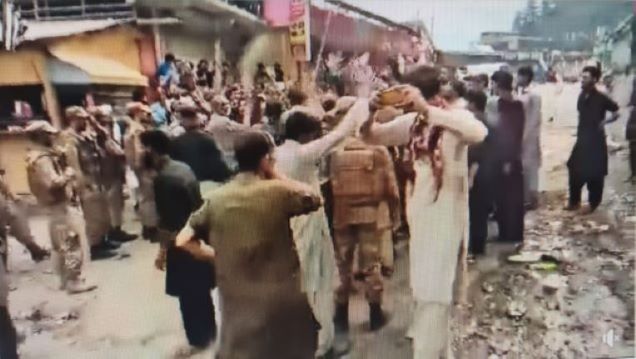 MUZAFFARABAD: According to the social media photos, reports and videos clashes have been erupted between FC’s personals and local people.

According to reports and posts, the FC soldiers stop a car for their personal use due to the shortage of transport there. The forced the women sitting in the car to get out. A young boy protested this behavior who was shot in head by the security personnel, who died at the spot.

After this incident, the local Kashmiris from nearby area gathered there and protested against the FC there. The civil administration along with the police also reached at the spot to control the law and order situation.

There are conflicting reports; some of them described that the FC again opend fire on the protesters which causes two more deaths and several causalities. The firing and slogans against Pakistan and India and against Pak army can be seen on different FB videos posted from the local Kashmiris in Sharda Bazar.

However the situation is still very tense in the area where the security forces are present in a bulk to handle any volatile situation.