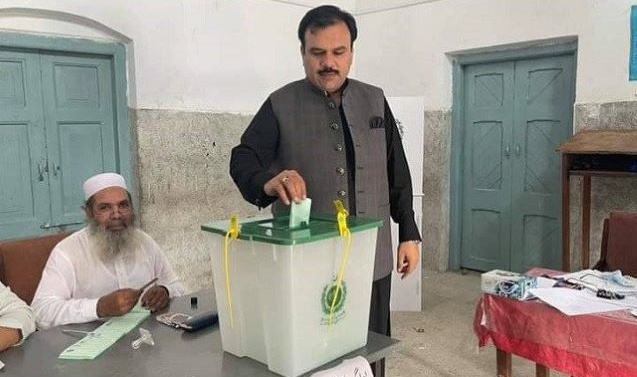 PESHAWAR/ ISLAMABAD/ AZAD KASHMIR/ KARACHI: Vote counting is under way and unofficial results started to pour in after polling for 45 general seats in Azad Jammu and Kashmir (AJK) concluded at 5pm on Sunday. However, reports of violent brawls started coming out a little over an hour after the polling process began in the morning.

According to reports, the polling process which began at 8am had to be stopped at several polling stations after activists belonging to rival parties got into violent brawls.

According to Express News, at least two activists of Pakistan Tehreek-e-Insaf (PTI) were reported to have been killed in clashes between political workers.

According to reports, a verbal clash broke out between the workers of PTI and Pakistan Peoples Party (PPP) at the polling station of Kotli’s LA-12 constituency.

During the brawl, one of the workers opened fire that resulted in the death of two activists. The clashes were reported to have taken place at polling stations of the region.

The workers of Pakistan Muslim League-Nawaz (PML-N) and PPP also came face-to-face at the Jaskol polling station of Hatiyan Bala. Activists of one of the political parties attempted to shut down the polling process.

The police subsequently arrested two workers of the PTI and six other workers of an independent candidate; polling resumed after peace was restored at the polling station.

“The turnout in the elections suggests that the common man has taken a keen interest in it and has expressed full confidence in the electoral process,” Fawad wrote on his official Twitter handle.

He said that Prime Minister Imran Khan’s government in AJK will give strength to the people of Indian Illegally Occupied Jammu and Kashmir (IIOJK).

Soon after the news of clashes broke out, Pakistan Muslim League-Nawaz spokesperson Marriyum Aurganzeb took to Twitter to express reservations against the ‘transparency’ of the polling process.

The PML-N leader stated that, “Transparency and impartiality becoming increasingly questionable in the AJK elections. Stopping our polling agents from entering the polling stations a violation of election laws.”

She further condemned the “transportation of polling materials in Pakistan Tehreek-e-Insaf’s vehicles”, as well as incidents of firing and interruption in the polling process.

Meanwhile, former prime minister Raja Pervez Ashraf accused the federal government of turning the AJK election into a “violent one”.

Addressing the media at the Pakistan Peoples Secretariat this afternoon, he accused the government of “using every tactic up its sleeve to disturb the electoral process”. Farhatullah Babar and other senior leaders of the PPP also accompanied him during the presser.

Ashraf claimed that an assassination attempt was made on PPP’s Chaudhry Yasin by his car being fired upon.

The former prime minister also accused some officers of the AJK administration of interfering in the electoral process. “The administration is attempting to help the PTI candidates in emerging victorious,” he stated, adding that he had contacted the chief secretary and IG AJK over the phone.

“The PPP’s electoral camps set up in Rawalpindi were uprooted,” the former premier complained. Continuing to rain down on the federal government, he accused the AJK administration of using the PTI’s vehicles.

“The candidates of PPP were beaten up in Rawalpindi and Jhang,” he said, adding that the people of AJK have now seen the “true face” of the PTI.

Ashraf termed the transparency and independence in AJK elections as being integral to the success of the larger Kashmir cause. “The government is playing with fire in AJK,” he remarked.

He further accused the PTI’s Ali Muhammad Khan and Kamran Bangash of pressurising the polling staff in Peshawar, while accusing the deputy speaker National Assembly of making visits to Quetta’s polling stations.

“One day, people in all of Kashmir will be able to express their right to vote with such freedom and form a government based on their representatives,” the minister stated.

Federal Minister for Planning and Development Asad Umar was also hopeful of his party now forming a government in AJK.

In a tweet, the federal minister mentioned the years and kinds of governments the PTI successively formed in Pakistan since 2018, stating that 2021 was the year of it forming a government in AJK.

Speaking to the media in Mirpur’s LA-3 constituency, Chief Election Commissioner Abdul Rashid Sulehria said he was “satisfied” with the electoral process. The commissioner had toured the Kotli district of Mirpur among other areas.

“People should come out and go to polling stations”, Sulehria said, adding that he hoped the voter turnout from Azad Kashmir would be at least 56 per cent.

He underlined that several violations of the Electoral Code of Conduct were committed, which were subsequently being dealt with in accordance with the law.

According to the commissioner, political parties and candidates have lodged several complaints. He clarified that voting would continue, uninterrupted, till 5 pm, after which no extra time will be given to any polling station.