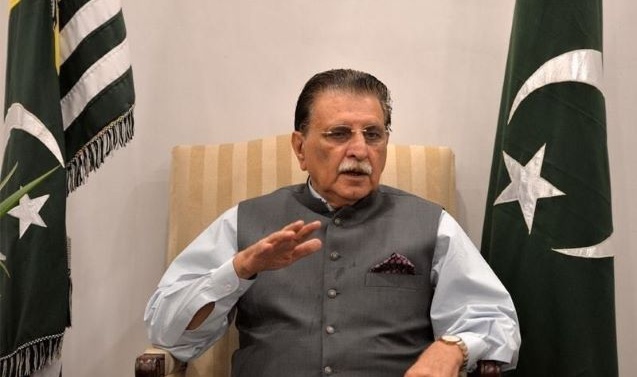 Azad Jammu and Kashmir (AJK) Prime Minister Raja Farooq Haider on Monday threatened to stage a sit-in in Islamabad “after consultations” with the leadership of PML-N if “direct meddling by the prime minister of Pakistan and his ministers” in the forthcoming elections did not stop.

“Prime Minister Imran Khan and his cabinet members are brazenly desecrating and contravening AJK’s Constitution. I want to place my case before the people of Pakistan,” Haider, who is also the regional president of PML-N, said at a hurriedly-called press conference in Muzaffarabad.

“Aren’t the AJK Constitution, laws, rules and regulations binding on them? Do they consider us [AJK people] slaves who can be bought with money?” he asked.

He maintained that the Kashmiris had never accepted slavery and they wanted to become part of Pakistan as “equal and free” citizens out of conviction through a UN-sponsored plebiscite.

He cited the example of Federal Minister for Kashmir Affairs Ali Amin Gandapur, saying that the AJK Election Commission had not only ordered the police to proceed against him under law but had also asked him to leave the territory after finding him guilty of serious breaches of the code of conduct and election laws.

“However, Prime Minister Imran Khan has not only been bringing Gandapur along with him at his election related engagements [in AJK] but he has also been allowing him to deliver speeches in what amounts to a serious disgrace to the people and institutions of Azad Kashmir,” Haider said.

The Election Commission in AJK had on July 16 slapped a ban on Gandapur from participating in election-related events in the region. The ban was imposed on him after he had made unpleasant comments in his speeches at different public meetings in AJK in violation of the election code and also created “law and order problems” with his acts, as observed by the election commission.

Hitting out at the government during his presser, Haider claimed that despite employing resources of the state, the premier had failed to make headway towards success of his party because people had preferred the PML-N over PTI.

Haider claimed that his party was destined to once again form government in the AJK.

“This has made Imran Khan jittery and out of this feeling he is denting the interests of the state of Pakistan,” he alleged.__Dawn.com