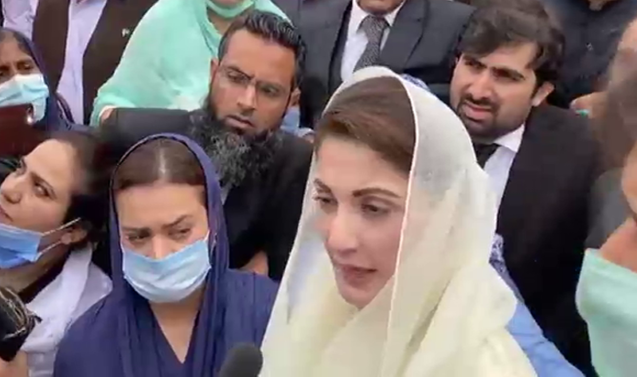 Addressing a rally at Chattar Klas village in the state to kick off the party’s campaign for the July 25 elections, Maryam asserted that the PML-N had mastered “the art of removing stolen seats from the government’s throat,” warning if the Kashmir election is stolen, they will set up camp on the highway in Islamabad.

She paid tribute to AJK Prime Minister Raja Farooq Haider and PML-N workers in the state, who despite attempts to “steal the election”, have “stood tall in defiance like a mountain”.

“Bear in mind that if you steal this election, Raja Farooq Haider and PML-N AJK, along with Maryam Nawaz, will hunt you down to the end of days.”

“AJK PM is not an easy man to defeat.”

She said the ruling government was mistaken in believing the politics of PML-N supremo Nawaz Sharif was over, saying PM Imran was scared of him. “They start and end talks with Nawaz Sharif. PML-N is standing like a rock today and it is no longer the same old PML-N.”

Expressing solidarity with Kashmiris on both sides of the divide, she said: “Nawaz will fight for your rights and independence, and he will see to it that victory falls into your laps.”

Refuting the impression that the PML-N was struggling to find applicants for the election, the PML-N leader said the party had received at least 10 and 20 applications from each district.

“I will speak about Kashmir and that is why I am here. I will also talk about how the one, who had stolen your votes, deprived you of wheat, sugar, electricity and medicines, and what things you must ask from (Prime Minister) Imran Khan.”__Tribune.com