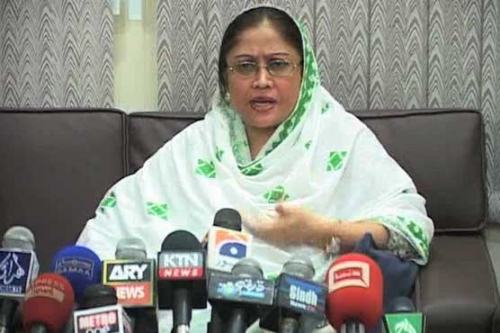 ISLAMABAD: Pakistan People’s Party (PPP) central leader and National Assembly member Faryal Talpur has said that PPP will form a government in Azad Jammu Kashmir with a historic victory.
To achieve the victory, it is necessary that the activists of Zulfikar Ali Bhutto start the election campaign with enthusiasm, she said, adding that PPP Chairman Bilawal Bhutto will soon visit Azad Jammu Kashmir and will lead the election campaign himself.
At Zardari House, Sardar Zahid Iqbal of the LA-34 Jammu 1 left PTI and joined PPP while Ishtiaq Ahmad Bukhari also joined PPP on this occasion. A delegation of 40 workers, including Sardar Zahid Iqbal and Ishtiaq Ahmad Bukhari called on Faryal Talpur.
PPP Secretary General Syed Nayyar Hussain Bukhari, PPP-AJK General Secretary Faisal Mumtaz Rathore and Sardar Ayub were also present on the occasion. Addressing the delegation, Talpur said that Bilawal Bhutto was the only political leader who was raising his voice for a referendum on the demands of Kashmiris.
She said that just as Zulfikar Ali Bhutto, Benazir Bhutto and Asif Ali Zardari did not disappoint Kashmiris, Bilawal Bhutto would also not disappoint the Kashmiris. She said that time has proved that Bilawal Bhutto’s stance on Indian PM was realistic. She said that the Kashmir issue would be resolved.
She asked Imran Khan to apologize to the nation for his statement. She said that the freedom of the people of Occupied Kashmir was their basic and democratic right. She said that India cannot maintain its aggressive occupation of the state for long. She said that like Zulfikar Ali Bhutto and Benazir Bhutto, Asif Ali Zardari also had a clear position on Kashmir.
She said that Kashmir cause has been the main pillar of Pakistan’s foreign policy of the PPP government. “It is unfortunate that the parties in power for the last eight years have not given importance to Kashmir cause,” she said, adding that no one made a foreign minister; someone made a foreign minister who was sitting in Multan or Islamabad during Indian aggression on Kashmir.
Even though, the president, the prime minister and the foreign minister used to make stormy tours around the world and all over the country, she said. Faryal Talpur urged the party workers to go to the streets and to their neighborhoods to inform about performance of the PPP governments and the performance of the governments of other parties.