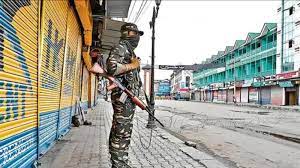 In the past couple of days, more paramilitary troops have been rushed to Kashmir stoking rumours that the central government was planning something big for the UT
Amid speculations that the Centre is about to make some major decisions on Jammu and Kashmir, Jammu-centric parties have again started raising the demand for separate statehood seeking “freedom from Kashmir’s hegemony”.
In the past couple of days, more paramilitary troops have been rushed to Kashmir stoking rumours that the central government was planning something big for the UT.
However, Kashmir inspector general of police (IGP) Vijay Kumar has claimed that the troops were returning from West Bengal where they had been deployed for election duty.
“Conducting delimitation of constituencies on the basis of fudged Census 2011 is the surest way to once again sell out Jammu and keep it hostage to fundamentalist Kashmiri Islamic hegemony,” said Ankur Sharma, president of IkkJutt Jammu.
He demanded full statehood for Jammu and bifurcation of Kashmir into two UTs, with one exclusively for the victims of genocide.
“Similarly, the average population growth of Jammu province, which was 31% between 1971 to 2001, dropped to 21% in 2011, and due to migration within and outside the state on account of Hindu and Sikh genocide in Kashmir, the percentage growth in Kashmir’s population should have been lower but it grew by 26% post 1991,” he said.
Sharma emphasised that delimitation at this stage and that too on the basis of an erroneous Census would consolidate subversives, Jihadists, Islamists and further perpetuate J&K as a non-secular, theocratic Muslim domain part from the rest of India.
“The only way to take abrogation of Articles 370 and 35-A to their logical conclusion is reorganising the state once again by dividing Kashmir into two UTs and granting full statehood to Jammu,” he said.
“The fraud of Census 2011 was aimed to destroy Dogra Hindus politically, socially, culturally and economically and create the basic foothold for demographic Jihad in Jammu,” he claimed.
Sharma urged the Prime Minister and Home minister to eschew the “sinister idea of conducting delimitation and immediately reorganize JK UT into 2 UTs and one state namely state of Jammu”.
Former minister and chairman of Dogra Sadar Sabha Gurchain Singh Charak said, “The Centre bifurcated this vast princely state into two UTs in August 2019. Our forefathers from all religions had toiled hard to make it such a vast state. Subsequently, big parts of it were usurped by China and Pakistan and then the state was bifurcated into two UTs on the grounds of checking terrorism and ending discrimination with Jammu, which had been going on for the past 70 years.”
Sharma said, “It is only because of the fudged Census 2011 that Kashmir’s population was falsely shown to have increased by 14,11,000 in 10 years from 2001 to 2011. While the fact is that in 2002, the number of voters in Jammu was more than Kashmir by 1.41 lakh.”