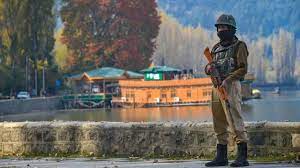 SRINAGAR: The arrival of 200 companies of paramilitary forces has sparked “apprehension” on social media that the Centre is contemplating “administrative division” of J&K districts and will “alter” the status of the Union Territory once again, a “speculation” squarely refuted by IGP-Kashmir range Vijay Kumar.
The rumour was first floated by a junior National Conference leader, Tanveer Sadiq, on social media that the government of India is contemplating “something big, vis-à-vis Kashmir” and also threw a question: “When is the government planning to detain politicians like in 2019?”
“Some political leaders who were detained after the special status of the state was revoked have expressed apprehension that they feared they could be detained once again,” said Sadiq, who was detained last year.
IGP Kumar, however, said, “The troops arriving are those who went on election duty to West Bengal and other states. They are being re-inducted. It’s not new deployment.”
Some local leaders too have raise concerns, saying this is for the first time that J&K is seeing such a big build-up since August 2019, when J&K’s special status was abrogated and the state was divided into two Union Territories — Jammu and Kashmir and Ladakh.
Last year, official sources had said that 200 companies were pulled out from J&K and sent to other parts of the country after protests broke out against the Citizenship (Amendment) Act.