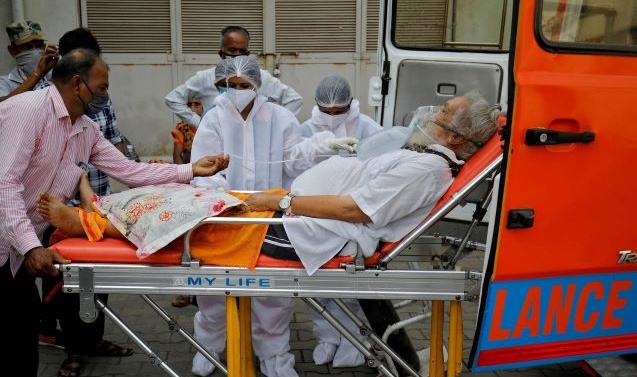 NEW DELHI: The first emergency medical supplies trickled into COVID-stricken India on April 27 as part of a global campaign to staunch a catastrophic wave in the latest pandemic hotspot, with the United States also pledging to export millions of AstraZeneca vaccines.

India’s infection and death rates are growing exponentially, overwhelming hospitals, in contrast to some wealthier Western nations that are starting to ease restrictions.

The virus has now killed over 3.1 million people worldwide, with India driving the latest surge in global case numbers, recording more than 2,800 deaths on April 26.

Crates of ventilators and oxygen concentrators from the U.K. were unloaded at a Delhi airport early on April 27, the first emergency medical supplies to arrive in the country.

Elsewhere in the capital, AFP images showed the bodies of COVID victims burning on funeral pyres set up in rows, the earth between them scorched by embers and littered with ash.

“So many people are dying because they are unable to get the most basic services,” Vinod Kumar told AFP outside a Delhi hospital as he tried to buy medication for a sick family member.

“This government has failed us so much.”

The United States, France, Germany, Canada and the World Health Organization have all promised over recent days to rush supplies to India.

U.S. President Joe Biden announced on April 26 the United States would send up to 60 million doses of the AstraZeneca COVID-19 vaccine abroad.

White House spokeswoman Jen Psaki said the recipient countries had not yet been decided and that the administration was still formulating its distribution plan.

But India appeared to be a leading contender after Biden spoke with his counterpart Prime Minister Narendra Modi – whose Hindu-nationalist government is under fire for allowing mass gatherings such as religious festivals and political rallies in recent weeks.

“India was there for us, and we will be there for them,” Biden tweeted after the call with Modi, referencing India’s support for the United States when it was enduring the worst of its COVID crisis.

The World Health Organization chief, Tedros Adhanom Ghebreyesus, on Monday described the situation in India as “beyond heartbreaking”.

“WHO is doing everything we can, providing critical equipment and supplies,” Tedros said.

France also said it would send eight oxygen production units, as well as oxygen containers and respirators, to India.

However many nations have also sought to close borders to travellers from India, fearful of a variant that appears to be one of the drivers of the surge.

Australia on April 27 became the latest nation to cut all passenger air travel with India.

Prime Minister Scott Morrison said the suspension would remain in place until at least May 15 due to “clearly present” risks of travel from India, leaving thousands of Australians stranded.

Among the Australians in India are a host of high-profile cricketers playing in the lucrative Indian Premier League.

In Europe, nations that have endured months of restrictions are taking steps towards normalcy as the benefits of vaccination campaigns start to kick in.

In Italy – the first European country to be hit by the pandemic in early 2020 and still one of the worst affected – bars, restaurants, cinemas and concert halls reopened on April 26.

After months of stop-start restrictions imposed to manage second and third waves of COVID-19, Italy hopes this latest easing will mark the start of something like a normal summer.

And Scottish pubs were allowed to reopen for the first time this year, along with non-essential facilities such as gyms, swimming pools and nail bars.

“It tastes incredible,” Gary McWilliams, 20, told AFP on April 26 as he sipped a beer.

“There is such a big difference between a pint that’s been poured and a can in your house.

“But I think for most people, just like me, it’s less about the actual beer and more about meeting up with a friend. It can’t be overstated that it’s a big part of Scottish culture.”__Hurriyet