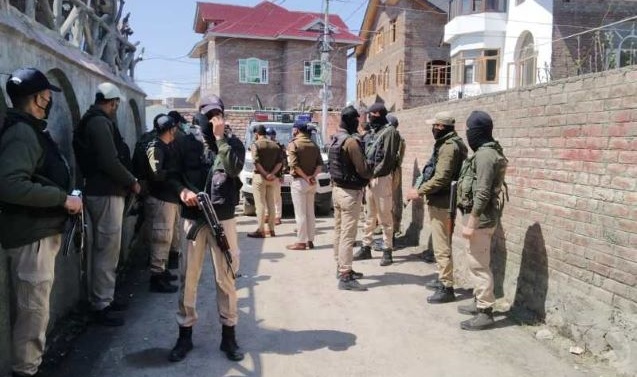 Inspector General of Police (IGP) Kashmir range, Vijay Kumar Friday said two out of three militants killed in a gunfight in southern Pulwama district were involved in an attack on a BJP leader’s residence in Nowgam, in which a police man was killed yesterday.

He said the attack on the BJP leader’s house was carried out jointly by the Lashkar-e-Toiba and Al-Badr outfit as a rifle snatched from the slain cop in Nowgam was recovered from the militants slain in Pulwama encounter.

The IGP also said that the man in whose house the gunfight took place in Pulwama is the owner of the vehicle which was used to ferry militants from Nowgam and that he will be booked under Unlawful Activities and Prevention Act (ULPA).

Addressing a press conference at Police Control Room (PCR) Srinagar, the IGP said that in less than 24 hours of the Nowgam attack, police solved the case by killing two out of four militants involved in the attack.

“Srinagar police along with Pulwama police worked on certain leads and laid a siege around Ghat area of Pulwama district. Earlier, we had arrested an over-ground worker Ishfaq Ahmed, who provided a tip off about militants hiding in a house at Ghat village,” the IGP said, as per news agency KNO.

“The militants refused to surrender despite repeated offers and instead took five civilians hostage. That’s why the operation got delayed. Contact with them was established at 4.35 am.”

He identified the slain as Suhail Nisar Lone, Yasir Wani, both residents of Khrew area of Pulwama and Junaid Ahmed from Prichoo, Pulwama. “The first two had joined militancy in February this year and the third one in March this year,” he said.

He said slain Suhail and Junaid were involved in yesterday’s Nowgam attack in which a police man Rameez Raja from Anantnag district was killed and his rifle snatched.

“Suhail is the one who was wearing burqa on Thursday. Suhail and Junaid were affiliated with Al-Badr outfit. From their possession we recovered one Ak-47 rifle, one pistol and the SLR rifle number 51392. This is the same SLR that was snatched from Nowgam attack site,” the IGP said, adding that “this makes clear that the slain duo were involved in yesterday’s Nowgam attack.”

He said two more militants of Lashkar-e-Toiba, Obaid and Shahid, both from Srinagar are still on the run. “Preliminary investigations reveal that Lashkar and Al-Badr had jointly carried out the Nowgam attack. We have solved the case in less than 24 hours,” he said, adding that efforts are on to trace the two Srinagar based militants. “We will get them soon,” he said.

He said that a vehicle bearing registration number JK13-E2098 that was used by Suhail and Junaid from Nowgam to travel from Pulwama was found outside the house in Ghat area of Pulwama where three militants were killed.

Kumar said that six militants were active in Srinagar. “We will not allow the situation in Srinagar to turn bad,” he said.

He said that a woman sustained a bullet wound in her leg during cross firing in Pulwama while three civilians sustained pellet injuries. “All are stable,” he said.__GK News