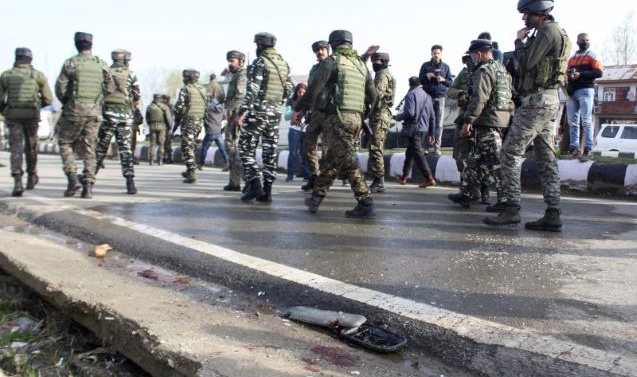 Two Central Reserve Police Force (CRPF) personnel, including an officer, were killed and two others injured in a ‘hit and run’ militant attack in Srinagar outskirts on Thursday. The attackers decamped with an assault Rifle from the spot. Search operation was underway to nab the attackers.

Officials identified the slain CRPF personnel as Assistant Sub-Inspector G D Manga Ram Dev Barman, a resident of Tripura and Ashok Kumar from Chandigarh. The injured have been identified as constables Nazim Ali and Jaganath Ray.

Official sources said that militants, whose number was being ascertained, opened fire on the vehicle of Road Opening Party (ROP) of CRPF- 73 Battalion at around 4 PM this afternoon near Noora Hospital on Srinagar- Baramulla Highway. “They opened indiscriminate fire on the vehicle and managed to escape,” officials said.

Public Relations Officer, CRPF, O P Tiwari said that in the firing, four CRPF men got injured. “They were shifted to 92 Base Hospital of Army, but one ASI among them succumbed on the way,” he said.

Tiwari said that the driver of the vehicle Ashok Kumar also succumbed to his injuries later in the hospital. “Others are being given specialized treatment,” he added.

Charu Sinha, the Inspector General of CRPF, said that they were ascertaining facts about the attack. “We lost two of our personnel in the attack,” she told Greater Kashmir. The attackers, she said, decamped with an assault rifle from the spot.

“We are ascertaining the facts as how many attackers were there and how they came,” Charu Sinha said, adding that Cordon and Search Operation (CASO) was underway in the area. “An investigation is in progress and the officers are working to ascertain the full details of this attack.”

The incident created panic in the entire area and traffic on the highway remained disrupted. The traffic was restored after quite some time

Immediately after the militant attack, more police, CRPF and army personnel rushed to the area and launched a search operation to track down the militants responsible for the attack. Senior police officers reached the spot to take stock of the situation. In the wake of this attack, the security in the city was beefed up. In the city, the joint parties of police and paramilitary forces were seen carrying out intense checking of vehicles. Additional barricades were also erected at some places.

Police sources said that the checking was part of an operation being carried out to track the militants.

Last year, in November two soldiers were killed in a militant attack that had taken place at Aban Shah Chowk HMT, Khushipora when militants opened fire on a Quick Reaction Team (QRT) of the Army.

Inspector General of Police, Vijay Kumar on Thursday paid tributes to Central Reserve Police Force who were slain Thursday attack and said that militant outfit Lashkar-e-Taiba was involved in the incident.

“IGP Kashmir and all ranks of Kashmir Zone Police pay rich tributes to SI/GD Manga Ram Devbarman & CT/Driver Ashok Kumar of 73Bn CRPF, who made supreme sacrifice in the line of duty. We stand by their families at this critical juncture,” police said in a statement.

“Preliminary investigations indicate that this attack was planned and carried out by the militant affiliated with proscribed militant outfit LeT.”

Police, the statement said, has registered a case in this regard under relevant sections of law. “Investigation is vigorously going on and officers continue to work to establish the full circumstances of this crime besides identifying the militants involved in the crime,” the statement said adding that the area has been cordoned and search in the area is going on to nab the militants.__GK News