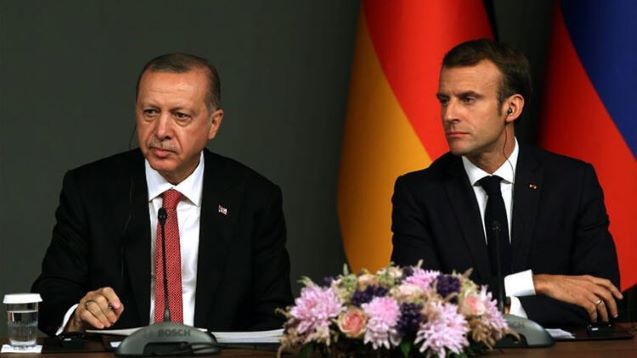 Cooperation between Turkey and France can contribute greatly to security, stability, and peace efforts in the world, the Turkish president said in a conversation with his French counterpart on March 2, as the two capitals move to ease bilateral tensions.

“As two powerful allies within NATO, we can provide significant contributions to efforts for security, stability and peace in a vast geography extending from Europe to the Caucasus, from the Middle East to Africa,” President Recep Tayyip Erdoğan said in a video conference with Emmanuel Macron, according to Turkey’s Communications Directorate.

“There are steps we can take jointly in the fight against terrorist organizations that threaten our countries and the safety of life and property of our citizens. We hope that Turkey and France act in solidarity regarding these issues,” Erdoğan added.

He noted that 2021 marks the centennial of the Ankara Agreement, which is the basis of Turkish-French bilateral relations.

Erdoğan stressed that the dialogue between leaders has always played an important role in Turkey-France relations.

The Turkish president stressed that the French-Turkish “friendship” has “overcome numerous obstacles” since the 16th century during the reign of French king Francis I and Ottoman sultan Suleiman the Magnificent and noted that he believed that cooperation between the two countries has great potential.

The president expressed that Turkey was closely following France’s fight against the COVID-19 pandemic. “On behalf of my country and nation, I offer my condolences for the French citizens who lost their lives due to the pandemic.”

This was the first call between Erdoğan and Macron since September as the two leaders have clashed over a range of issues including the conflicts in Syria and Libya as well as the eastern Mediterranean.

Last month, the Turkish and French presidents exchanged letters in which they have agreed to resume talks aimed at fixing ruined ties.

Ties between the two allies were severely strained in 2020 due to bilateral rows and regional conflicts from Syria to Libya and from Nagorno-Karabakh to the eastern Mediterranean. In parallel with de-escalation in the eastern Mediterranean in early December 2020, Foreign Minister Mevlüt Çavuşoğlu and French Foreign Minister Jean Yves le Drian decided to end this negative trend in ties and launch a road map for reconciliation.__Hurriyet