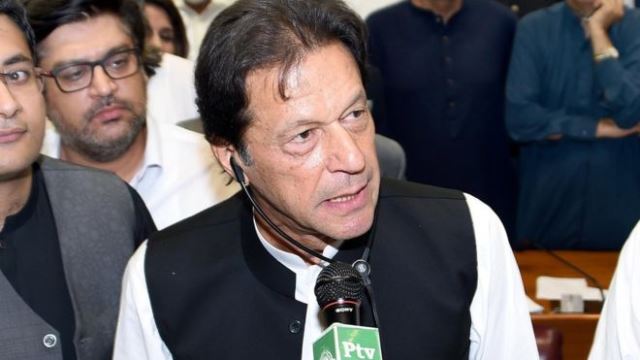 Following the shock defeat of Pakistan Tehreek-e-Insaf (PTI) candidate Abdul Hafeez Shaikh in the Senate elections on Wednesday, the members of the opposition are questioning the moral justification of Prime Minister Imran Khan to stay at the helm.

On the other hand, the government accused the opposition of indulging in corrupt practices to win the hotly-contested Senate elections.

After the announcement of the results, PDM Head Maulana Fazlur Rehman, while congratulating Gilani on his historic victory over Shaikh, said that the “fake prime minister” has lost his majority, adding that Imran Khan should resign today.

“The fake and selected prime minister has lost confidence of his own members. Today, our stance was vindicated that 2018 general elections were rigged,” he added.

Fazl said that even during the PDM rallies, the masses had rejected the selected and fake prime minister.

Former Sindh Governor and PML-N leader Mohammad Zubair, during a press conference in Islamabad, said the victory of Gilani is the first step towards sending PM Imran packing.

Zubair said that the situation was not favourable and all forces were against us but we won. “Imran Khan talks about democracy… if he has a bit of self-respect left then he should resign and go home [now],” he added.

He said that it was a big upset since all forces were behind the government’s candidate. “Now we will see whether Hafeez Shaikh lives in Pakistan or not. You’ll probably see him leaving in the next few days,” he claimed.

PPP Chairperson Bilawal Bhutto Zardari called it a victory for democracy. “Democracy is the best revenge,” he wrote on his official Twitter handle after the results were announced.

Maryam Nawaz, one of the key cogs in the anti-government movement under the banner of the Pakistan Democratic Movement, heaped praise on all those who voted against the ruling party in the Senate elections while speaking to over 5 million of her followers on Twitter.

“Thanks to Almighty Allah who gave victory to the PDM. The fake mandate is snatched back by people’s representatives – Despite pressure from their own people, lawmakers refused to vote for flour thief, sugar thief, power thief, vote thief Imran Khan. You [PM Imran] now have no justification to occupy the Prime Minister’s House. Leave the office you vote thief,” she wrote on her official handle.

In another tweet, Maryam said that PML-N MNAs not only stood by the former prime minister and PML-N supreme leader Nawaz Sharif but also made him proud.

PML-N leader Awais Leghari said that the Parliament expressed no confidence in Imran Khan’s policies today. “Confrontational politics and incompetent governance of Niazi not an option for Pakistan anymore,” he tweeted

ANP leader Asfand Yar Wali said that PM Imran has lost legitimacy to remain in the office after today’s elections.

“The victory of Yousuf Raza Gilani is the victory of democracy. During a referendum against the government, the MNAs have announced their decision,” he tweeted.

“Voters were kept and harassed for two days in a Karachi hotel for the Senate elections… even the rooms were booked under the name ‘Senate elections’,” he said and added that if the government hadn’t created such a situation, PPP would’ve won nine seats from Sindh.

Regretting the exchange of blows between PTI and PPP candidates in Sindh Assembly a day earlier, CM Sindh said that the Speaker has ordered an inquiry into the matter.

He said that Gilani’s victory was a victory for democracy, adding that the Senate election results have been in favour of PPP.

Meanwhile, members of the government accused the opposition of resorting to horse-trading in the elections.

“Congratulations Fauzia Arshad of PTI for winning the women seat from Islamabad 174 vs 161 [votes]. This also tells there was a clear horse-trading on the men’s seat,” Senator Faisal Javed Khan tweeted.

Minister for Information and Broadcasting Shibli Faraz, while talking to the media in Peshawar, said that the scenes from the last few days have been deplorable.

“How is it possible that apart from Islamabad all the results have been in our favour. Imran Khan will never surrender to the dirty politics of the opposition. We will rid Pakistan from it once and for all,” he added.

Shibli criticised the manner in which the opposition conducted itself during and before the elections. “The opposition was trying to weave its string of corrupt practices in order to win the Senate elections,” he added.

“Just as initial response”, Shehbaz Gill, the prime minister’s aide on political affairs, said unverified results show a slim margin of five votes for Gilani, while seven votes were rejected. “We will challenge this result,” he added.

Pakistan Tehreek-e-Insaf (PTI) leader Faisal Vawda said that winning or losing an election is part of the process and no one can do anything about it. “I am also a human… I predicted but it did not go that way,” he said after the announcement of results.

“If you talk about the ethics then 90 to 95 per cent politicians in Pakistan would be in prison… there are no ethics in this country,” he concluded.__Tribune.com